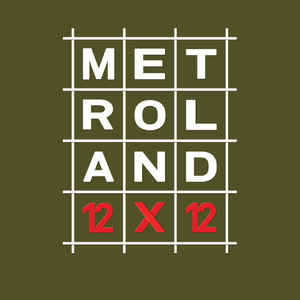 Background/Info: Belgian Metroland duo saw the daylight in 2012 and became an instant success. In only five years a lot of things happened, but the success story still seems to go on while no one knows where it will finally stop. “12 x 12” is a kind of original ‘best of’ getting us back to the band’s most famous tracks. This box features 3 CD’s revealing 12 extended versions (disc “12 x 12), the 12 B-sides cuts (disc “12 + 12”) and 12 single versions (disc “12 <> 12”). But there also is an extra disc featuring demos, rare and unreleased remixes and even previously unreleased songs.

Content: Metroland is an electro-pop formation, but one with a specific sound. That’s why I prefer to call it ‘robotic-pop’ for the sterile and stiff sound approach or ‘Kraftwerk-pop’ for their inspiration. This impressive Box will get us back to some of the band’s most famous songs taken from their 3 albums, but still from the exclusive EP “Thalys” and their latest EP “Cube”.

Metroland is the digital version of Kraftwerk, but also a band that goes further than only emulating their heroes. It’s a band with a funny concept and which takes care of an alluring artistic package.

This is an opportunity to discover (re)mixes you maybe never heard, and also a few previously unreleased songs you’ll discover at the bonus disc.

+ + + : One of the main strengths from a band is when as the listener you can immediately recognize the band you’re listening to. That’s precisely what Metroland is all about. Yes, they’re strongly inspired by Kraftwerk, but they have constructed a very own sound DNA, which sometimes reveals a few EBM elements, computer voices mainly dealing with the band’s conceptual themes they developed on each album. The music is well-crafted and mainly characterized by Kraftwerk-ian bleeps, astral strings and robotic vocals. It’s a real lust for the ears (re)discovering songs such The Passenger”, “Thalys”, “Re-Design”, “From Station To Station”, “The Manifesto” or “Under The Roof”. The bonus disc featuring ‘new’ songs will be for sure a little extra for the fans. Last, but not least I also have to say a word about the styled artwork and informative files about this release featured with this box.

– – – : 4 CD’s and 48 songs for more than 250 minutes of music! You definitely have to be a die-hard fan to fully enjoy this Metroland-orgy! But that’s precisely what fans want, isn’t it!? The ‘new’ songs aren’t exactly the best cuts Metroland has ever composed and that’s probably why they never saw the daylight till now.

Conclusion: “12 x 12” is a great celebration of only five years Metroland! The biggest challenge for the band will be to hold on their prolific and qualitative level!