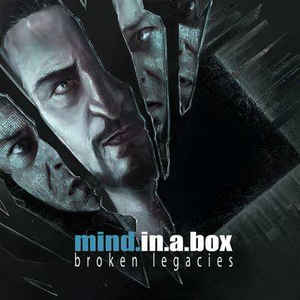 Background/Info: Stefan Poiss is back with his ‘Mother ship’ project Mind.In.A.Box for a new voyage throughout sci-fi electro-pop fields. “Broken Legacies” has been presented as an album clarifying several major themes from previous albums. This album also is the first M.I.A.B. work released on Poiss own label Thyx Records.

Content: M.I.A.B. remains a very particular and rather unique experience in electro-pop music. This new album moves on there where previous work stopped. It’s a styled and somewhat complex pop format carried by great sound treatments and recovered with space-like atmospheres. I now and then also noticed a psychedelic touch, which is more familiar in Thyx (side-project).

The vocals of Stefan Poiss once more remain an essential aspect of the production. Next to the familiar robotic effects, he once more reveals great vocal capacities.

+ + + : “Broken Legacies” is a diversified piece of work, which remains one of the main characteristics of this formation. M.I.A.B. moves from danceable cuts to pure evasive tracks to pop-rock approach. The progression of the songwriting is absolutely impressive. This work sometimes reminds me to Michael Cretu (Enigma). There’s a similar genius emerging from the production characterized by an evasive/astral sound dimension and composed with great sound treatments. The ambient- and somewhat psychedelic touch is another element reminding me of Cretu’s work. But M.I.A.B. first of all remains a band taking some distance with the ‘familiar’ electro-pop standards. The final part of the album reveals the most danceable cuts, which I personally prefer. There are many noticeable songs such as “World Of Promises”, “Don’t Sleep” and “Arcade” featuring delicious female vocals.

– – – : This album needs a few listening before you really get into the sound universe of this band. It’s not a classical electro-pop album and that might be an obstacle for electro-pop lovers in search of new Depeche Mode clones.

Conclusion: While electro-pop music often is a genre that will make you dance and make you happy, Mind.In.A.Box more sounds as a voyage throughout new electro-pop paths. It remains one of the most atypical- and visionary projects dealing with electro-pop and therefore one of the few artists who dares to innovate.