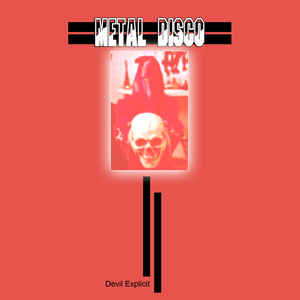 Background/Info: Behind this funny band name is hiding Greek artist Toxic Razor. If the name of this artist doesn’t make ring a bell, you maybe know Paradox Obscur in, which he’s involved together with Kriistal Ann. Metal Disco has already released a few productions on Werkstatt Recordings, which is the label of Toxic Razor and on which he also released several productions as Beatbox Machinery. This EP rather looks like a mini-album featuring 6 songs.

Content: The main link between Paradox Obscur and Metal Disco is the ‘love’ and passion for retro-electronics. The sound is totally devoted to the 80s spirit, somewhere in between good-old wave-pop music and electroclash with some extra EBM elements on top. The vocals are quite sterile-like, which appears to be a cool match with the music.

+ + + : Metal Disco is a pretty cool discovery. It sounds old-school like and yet refreshing. This is because of the great sound treatments featuring dry bass lines and analogue melodies. The EBM touch on top of the work injects a naughty, danceable touch. I also like the tracks for their melodic approach. “Destroyer” is a potential hit for dancefloors.

– – – : The main difficulty with such a fascinating release is to catch the attention of a wider audience. Promotion will be really important, but the band gets my full support!