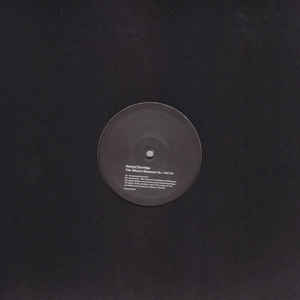 Background/Info: Samuel Kerridge definitely is one of those visionary artists who’s not dealing with one explicit and established music style, but just covers different influences to create a very own sound. That’s what he already masterly accomplished on phenomenal albums such as “Always Offended Never Ashamed” and “Fatal Light Attraction”. He now strikes back with a new 12” revealing 3 new cuts.

Content: “The Silence Between Us” remains a sonic enigma on, which the producer reveals cutting bass lines mixed with somewhat tribal elements. In the end I should say it all appears to be an experimental techno format carried by nervous rhythms and bombastic arrangements.

+ + + : The tracks have been progressively built up revealing the meticulous writing of the artist and high-tech production skills. I especially like the heavier and into bombast sounding treatments. I can’t say it’s the best work I’ve heard from Kerridge although it remains totally avant-garde minded.

– – – : This 12” is one of the most experimental works I’ve heard from Samuel Kerridge. It’s the kind of work that can’t leave you unmoved although I’m missing an apotheosis.

Conclusion: This work is not exactly the one I would recommend to music lovers who never heard of Samuel Kerridge before. It’s a new experience where the artist is maybe going a bit too far in his sonic exploration.