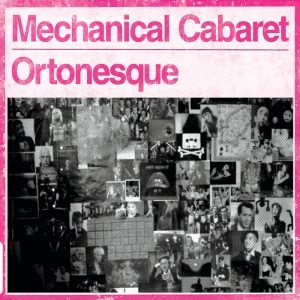 Background/Info: “Ortonesque” is the seventh full length released by London based Mechanical Cabaret. Set up in the late 90s by Roi Robertson (ex-Nekromantik) he now together with Steve Bellamy released the first new Mechanical Cabaret work on WTII Records.

Content: Mechanical Cabaret has always dealt with a unique approach to electro-pop music. “Ortonesque” doesn’t sound that different and has been introduced as being their darkest work to date. I experienced the new songs as some of their most intimate work to date. There’s a twist between slower and minimal-like cuts, which are sometimes a bit cabaret-like at one side and more danceable and purer electro-pop sound at the other.

Some songs might appeal to lovers of De/Vision and even Depeche Mode, but globally speaking “Ortonesque” sounds more experimental and unpolished.

+ + + : Mechanical Cabaret will never become the most typical formation in their genre and there is the feeling of defying the pop standards a bit. That’s an approach I’ve always liked instead of becoming a new Depeche Mode clone. It sounds minimal although always connected with electro-pop. I like some of their melancholic passages, but I’m more into tracks like “Protect And Survive” and “Beautiful and Boring”.

– – – : I experienced the opening cuts as hesitant, but especially produced in a raw and unpolished way. No doubt about it this has been a deliberate choice, but it can’t convince me. The softer cuts, which sometimes make me think of a kind of cabaret style are a nice experiment, but here again not the most convincing part of the work.

Conclusion: Mechanical Cabaret remains a good alternative to the classical synth-pop music, but this new work can’t totally convince me. I’ve heard much better albums from this formation. Nevertheless the final part of the “Ortonesque” features a few cool cuts.