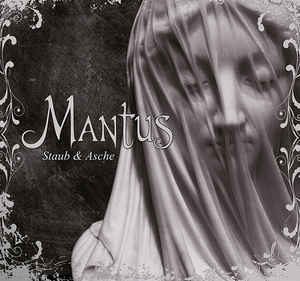 Background/Info: Mantus definitely is one of the most faithful ambassadors from the German label Trisol. All releases have been released on Trisol while the band driven by Martin Schindler and Chiara Amberia (vocals) can already look back at an impressive discography. “Staub & Asche” appears to be the band’s 15th studio album and the fans will be not disappointed that it is a double disc.

Content: Since the very first Mantus album (cf. “Liebe Und Tod”) released in 2000 Martin Schindler has always remained faithful to a kind of melodic and melancholic gothic sound, which he constantly spiced with new elements. Right at the moment I thought Mantus was becoming a goth-metal formation, he back again moved to more ‘classical’ structures.

“Staub Und Asche” doesn’t move back at all to the original sound of the band, but you might recognize the traditional aspects accentuated by dreamy choruses, melancholic atmospheres recovering the songs, empowering guitar play and the duality in the vocals. Next to the angelic and heavenly female vocals you get the more dramatic male vocals. I don’t say that it’s a completely new element featured on the main disc, but I noticed a more explicit cinematographic aspect, which mainly comes through at the instrumental song “Melancholische Unruhe”.

The second disc entitled “Blumen In Der Hölle” is something totally different. This album is pure poetry and sounds definitely as the most personal and intimate work of Martin Schindler to date. Chiara Amberia is not featured on this disc. The songs clearly sound like the artist exorcising his most intimate ideas. It sounds pretty gothic as well and might remind to Goethes Erben. It’s more theatric, but still revealing a few surprising songs evoking Endraum.

+ + + : I’ve always been seduced by the work and the gothic magic of Mantus. It’s not that different for this new opus revealing two different sides. You first get the ‘traditional’ approach featuring melancholia, drama, beautiful piano arrangements, powerful guitar play and elevating choruses and a perfect twist between both singers. I’ve to admit I always have had a preference for the angelic vocals of Chiara injecting a more refined and delicate touch to the work.

Next you get the second disc revealing something new for Mantus. It’s a more classical and I dare to say ‘old-styled’ gothic approach, which is evoking different German productions from the 90s, but it’s well crafted, intimate and sometimes dreamy-like.

Last, but not least this CD-format features a great artwork featuring a beautiful digipak and including 2 massive and separate booklets.

– – – : Even if “Blumen In Der Hölle” sounds different from what we’re used to hear from Mantus, this band has no longer a surprising effect. And that’s quite understandable for a band, which is already active for more than 20 years now so it will not become my favorite Mantus album in history. When you know Mantus, you already know in advance what you going to hear… but I still like it!

Conclusion: If you like German gothic music, Mantus remains a sure value in the genre and especially because this new oeuvre reveals 2 different although related sides.

Since you’re here … … we have a small favour to ask. More people are reading Side-Line Magazine than ever but advertising revenues across the media are falling fast. And unlike many news organisations, we haven’t put up a paywall – we want to keep our journalism as open as we can. So you can see why we need to ask for your help. Side-Line’s independent journalism takes a lot of time, money and hard work to produce. But we do it because we want to push the artists we like and who are equally fighting to survive. If everyone who reads our reporting, who likes it, helps fund it, our future would be much more secure. For as little as 5 US$, you can support Side-Line Magazine – and it only takes a minute. Thank you. The donations are safely powered by Paypal.
Tags: Mantus, Trisol