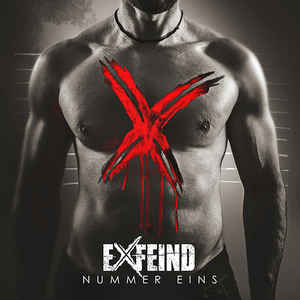 Background/Info: Trisol is not often signing new bands, but when a new artist joins the German label you  nearly know for sure it’s worthy to discover. Behind Exfeind is hiding the solo-project from Lian Exfeind. The debut album is logically entitled “Nummer Eins”

Content: If you’re familiar with the Trisol roster and especially with the ‘typical’ German ‘industrial’ bands such as ASP and Samsas Traum, you might have an idea of how Exfeind sounds. I think we can easily speak about a sonic offspring between Oomph!, Rammstein and Eisbrecher. It’s not only about the powerful vocals sung in German, but the influences mixing metal guitar riffs, electronic arrangements à la Rammstein in the choruses and gothic atmospheres are intended to conquer the German scene.

+ + + : The opening song of the album directly reveals the power and knowledge of Exfeind. But there’re more potential hits featured on this album. Exfeind has accomplished a truly ‘tour de force’, which is due to the perfect match between the different influences featured on this work. I’m fond of this metal-gothic power achieved with electronics. It especially during the choruses creates this elevating sensation, which I’m sure is what we expect when listening to music.

– – – : No doubt about it, Exfeind has become an instant success in the German scene so who am I to point out any single negative argument!? I just regret there’s no real originality in the sound writing, which sounds as the perfect symbiosis between all aforementioned bands. Trisol took less risk singing this band!

Conclusion: “Nummer Eins” became a prophetic title as the album gained the podium of the famous ‘Deutsche Alternative Charts’! I definitely can speak about a hot and successful debut for Exfeind!