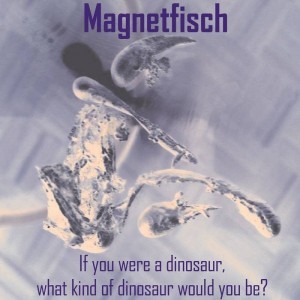 Background/Info: The Swiss trio of Magnetfisch has already been active since the early millennium years and has mainly self-released a considerable number of productions. This EP reveals 3 new tracks.

Content: Magnetfisch mixes electronics together with guitar and bass guitar. The songs remain instrumental, which sometimes accentuates the soundtrack approach of the composition. It’s however pretty difficult to qualify this band as any particular genre. It for sure sounds a bit cinematographic, but you’ll also notice harder, industrial guitar parts with a funky touch on top. There also is a kind of hopping rhythm running through one of the songs.

+ + + : Magnetfisch aren’t copyists, but again tries to move with their own sound composition mixing different influences with each other. There’s a nice twist between rock- and pop elements, while in the end it could be a soundtrack composition for an imaginary movie. I especially like the opening song “Petit-Peur”, which totally fits to this genre.

– – – : “If You Were A Dinosaur, What Kind Of Dinosaur Would You Be?” is an easy listening production although there’s no real highlight. I’m missing an apotheosis! A few vocal parts could add something extra to the work.

Conclusion: This EP could be used as pop-rock soundtrack for a dark theme.

Since you’re here … … we have a small favour to ask. More people are reading Side-Line Magazine than ever but advertising revenues across the media are falling fast. And unlike many news organisations, we haven’t put up a paywall – we want to keep our journalism as open as we can. So you can see why we need to ask for your help. Side-Line’s independent journalism takes a lot of time, money and hard work to produce. But we do it because we want to push the artists we like and who are equally fighting to survive. If everyone who reads our reporting, who likes it, helps fund it, our future would be much more secure. For as little as 5 US$, you can support Side-Line Magazine – and it only takes a minute. Thank you. The donations are safely powered by Paypal.
Tags: Magnetfisch