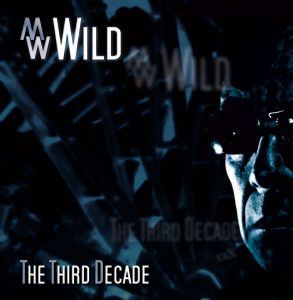 Background/Info: M.W. Wild was formerly involved in The Cascades, a band with whom he recorded four albums. The last album of The Cascades was released in 2006 so in a way this is a comeback for M.W. Wild. The album has been mixed and mastered Tom O’Connell (ex-House Of Usher, ex-Garden Of Delight, Umbra Et Imago).

Content: “The Third Decade” is an album that will instantly evoke good-old souvenirs from the 80s new-wave decade. You can clearly hear the influence from The Sisters Of Mercy, but I also have to mention a more contemporary band like The 69 Eyes. The debut songs are getting us back to the essence of great new-wave music, which is characterized by the typical dark and melancholic guitar playing. The carrying choruses are quite noticeable and definitely one of the main characteristics of M.W. Wild.

The songs are progressively evolving towards a mix between guitar and electronic arrangements. The vocals add some passion to the work and are once more a link with the deep, graveyard-like timbre of voice from the ‘Sisters’ singer.

+ + + : “The Third Decade” sounds like a solid ‘déjà-vu’ effect. The songs are predictable and yet fully accomplished. The great guitar playing and charismatic vocals are sublime! There’s a very strong and efficient emulation of 80s new-wave music. The songs are carried by real great choruses. The songs move in between powerful cuts and deep, melancholic pieces driven by a slow cadence. The obscure atmosphere comes together with well-crafted melody lines and refined piano-like arrangements. There are multiple noticeable songs on this album.

– – – : The single reproach I can imagine is the lack of originality. This work sounds like a pure emulation of new-wave music and a copy of The Sisters Of Mercy.

Conclusion: If you’re fond of typical guitar new-wave music you better get a taste this great album by M.W. Wild. This artist reveals to be a talented musician who has found the keys to compose alluring new-wave in the true spirit of the 80s.