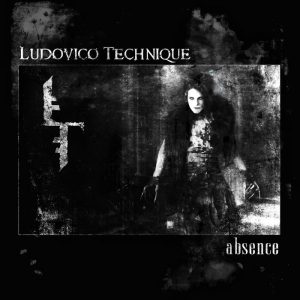 Background/Info: Ludovico Technique has released their first new stuff after a hiatus of four years. They in the meantime remained active on stage, doing the support for leading formations such as Leather Strip, God Module, Nachtmahr, Grendel. “Absence” has been released in Europe on Infacted Recordings featuring the title song plus 4 remixes. The EP has been released in the US on Metropolis featuring 4 different remixes.

Content: “Absence” is a song mixing dark-electronics and raw industrial-pop elements. The song has been empowered by extra guitar sounds. The vocals have been sung in a somewhat half-spoken, spooky way injecting a dark, moody touch on top of the song.

Remixes have been accomplished by Grendel, Leather Strip, Massive Ego and shiv-R.

+ + + : “Absence” is a cool and efficient title song, which has all required elements to make people dance. It features great dance vibes mixed with a cool chorus. This is without a shadow of a doubt one of my favorite Ludovico Technique-songs ever.

The remixes have been made by noticeable bands, which is an extra way to catch the attention. The most original remix is the more minimal-like one by Shiv-R.

– – – : The American edition features the same title-song, but remixes by The Birthday Massacre, Bestial Mouths, Encephalon and Ghostfeeder. A quite interesting program you can only discover as well, but in the end you’ll be saturated by remixes. I however expected a bit more from the remixes for this European edit.

Conclusion: “Absence” is the perfect song to strike back and put Ludovico Technique back on the map. There’s no better way striking back than getting people to dance!

Since you’re here … … we have a small favour to ask. More people are reading Side-Line Magazine than ever but advertising revenues across the media are falling fast. And unlike many news organisations, we haven’t put up a paywall – we want to keep our journalism as open as we can. So you can see why we need to ask for your help. Side-Line’s independent journalism takes a lot of time, money and hard work to produce. But we do it because we want to push the artists we like and who are equally fighting to survive. If everyone who reads our reporting, who likes it, helps fund it, our future would be much more secure. For as little as 5 US$, you can support Side-Line Magazine – and it only takes a minute. Thank you. The donations are safely powered by Paypal.
Tags: Encephalon, Ghostfeeder, Infacted, Ludovico Technique, Nachtmahr, Shiv-R