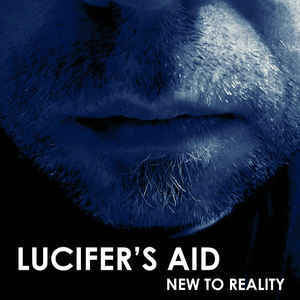 Background/Info: Lucifer’s Aid was set up in Spring 2016 and immediately got signed to Progress Productions. This solo-project of Carl Nilsson, who’s also member of The Operating Tracks, released its official debut album featuring 10 songs.

Content: From the very first notes of the album you directly notice the dark-EBM format the songs have been made with. The bass lines are somewhat into bombast and still very dry like any good-old EBM. The vocals are spooky, which creates a somewhat haunting feeling and, which perfectly matches with the harder, industrial elements running through the composition.

Lucifer’s Aid indeed is not exactly an EBM-stereotype. The sound mixes the basis of body music together with more complex and harder industrial influences. One of the main sources of inspiration clearly appears to be The Klinik. I’m referring to the sophisticated drum patterns and the cold-sphere hanging over the work. I think it’s a sound that might also appeal for lovers of early Mentallo & The Fixer.

+ + + : I really enjoyed the mix of typical EBM structures with harder, industrial influences. It creates a different kind of body music although very efficient. I like the haunting atmospheres, but also the sound treatments revealing subtle bleeps mixed with bombastic arrangements. It sounds rough and yet refined while the vocals inject an extra haunting touch.

– – – : I regret there are only 10 songs featured on this album while the length of the tracks remains pretty short. I’m also convinced the front cover could have been a bit more creative.

Conclusion: Progress Productions appears to be really excited about this new band and I can only agree. “New To Reality” is an impressive piece of dark, industrial body music and definitely one of the most noticeable albums of the year in this genre of music.

Since you’re here … … we have a small favour to ask. More people are reading Side-Line Magazine than ever but advertising revenues across the media are falling fast. And unlike many news organisations, we haven’t put up a paywall – we want to keep our journalism as open as we can. So you can see why we need to ask for your help. Side-Line’s independent journalism takes a lot of time, money and hard work to produce. But we do it because we want to push the artists we like and who are equally fighting to survive. If everyone who reads our reporting, who likes it, helps fund it, our future would be much more secure. For as little as 5 US$, you can support Side-Line Magazine – and it only takes a minute. Thank you. The donations are safely powered by Paypal.
Tags: EBM, Klinik, Lucifer's Aid