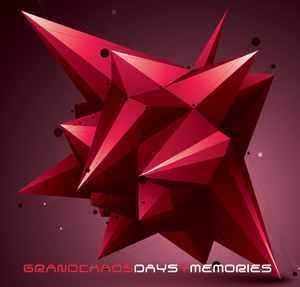 Background/Info: Tcheleskov Ivanovitch is now already active under the Grandchaos moniker for more than 10 years. Based in Belgium this artist is a kind of electro-veteran who was the founder of Ivanovitch DLO while he now also set up a new project together with Jacky Meurisse (SA42) called Grand O Chaos.

This CD format is strictly limited to 100 copies!

Content: We get a total of 8 songs (4 on each 12”), which have been remixed by an interesting selection of artists. The “Days”-EP is more into minimal-electronics and EBM featuring remixes from 2XNI, Franck Kartell, Nomenklatür and Azlack.

The “Memories”-EP sounds a bit different and more experimental, but still technoid-like. We here get remixes by Noamm, Artion, Simon Carter and 14 Anger. Simon Carter and 14Anger transformed the original version into a hard-kicking techno vibe.

+ + + : The remixes from the “Days”-EP are simply devastating. The analogue sound sculptures from Franck Kartell and especially Nomenklatür left me breathless. This is great electro music made of power and magic of sound creation! No presets here, but amazing and overwhelming sound treatments leading the listener into frenetic dance moves. The remix of Azlack reminds me of Nitzer Ebb’s “Murderous”.

– – – : The experimental- and techno-driven side of this work is less convincing. It brings for sure extra diversity to the work, but it feels a bit ‘unnatural’ as it’s far away from the original Grandchaos sound.

Conclusion: This EP features a great diversity in the remixes, but the most EBM-driven ones are absolutely amazing. This is the modern sound of EBM that will for sure make you ‘move your body’!