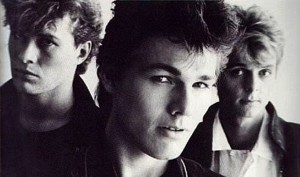 A few months ago we announced that a-ha would have worked together again with John Ratcliff, but strangely enough our requests for further info on this weird info – it’s widely known that John Ratcliff and a-ha no longer are on speaking terms – remained unanswered by a-ha’s team. We now know why.

As it turns out, things were a little bit more complicated than that. Until recently, 2011 to be precise, Ratcliff held on to Paul Waaktaar-Savoy’s old diaries (including lyrics, notes, plans, sketches and drawings), the band’s eight-track tape recorder and – and this is interesting – the band’s early 15 tape reels recordings also known as the Rendezvous Studios tapes. The story was made public by Aftenposten.

26 years after the band forgot to take the material with them from the carpeted studio floor they slept on, they finally returned in the hands of the band. Part of the studio tapes will now see a release on the band’s upcoming 4CD/DVD set of their debut “Hunting High and Low”. We have to thank all this to the work of Norwegian a-ha fans Petter-Anton ‘P.A.’ Stenersen, a high school teacher, and Christopher Hopkins who bought the material straight from John Ratcliff for almost 19.500 UK Pound. ‘Ransom money’ as some around the band call it.

John Ratcliff entered a-ha’s career in 1983 when the entire band lived for 2 years on the carpeted floor in the Rendezvous Studios in London. Studio owner, John Ratcliff, quickly became the band’s first manager who also produced their first album. Ratcliff: “I played keyboards and performed backing vocals on “Hunting High and Low” and sang the highest note of all the tracks on “Here I Stand and Face the Rain”. When a-ha left the studio to travel the world promoting “Take on me” and their debut album “Hunting High and Low”, they practically left all their belongings behind in the Rendezvous Studios.”

Ratcliff decided to take the material home in the end. Not that he kept them intact according to Waaktaar-Savoy, because ripped-out pages from the notebooks were beginning to appear on eBay in the years after. Ratcliff denies he was the eBay seller though.

Immediately after the handover the reels were rushed to the studios of the Manchester School of Sound Recording in order to transfer the sound. The super deluxe-version of “Hunting High and Low” (4 CDs and 1 DVD) will contain many of the songs Stenersen salvaged from London in 2011, hence the John Ratcliff connection we reported about a while ago.

And there’s more. In one notebook Waaktaar-Savoy found a song which will now be featured on the band’s upcoming “Cast of Steel” album, namely song number 9, “She’s humming a tune” which was written 31 years ago. Paul Waaktaar-Savoy: “When I got the books were back, I saw the text and remembered ‘that one yes, that was cool’. Then I thought it would be cool to record this one in particular now.”

For fans the story also has some extra juicy details. Ratcliff says that Warner initially wanted to pull out of the agreement to release “Hunting high and low” unless the recording would sound like the one that had been played to them in the beginning (the Ratcliff recording that is). On top they would have requested that a-ha should be kept out of the process. Ratcliff: “Some of the things I did are still unknown to the boys. They don’t know how close they were to the boat back home.” So Ratcliff made new recordings after producer Tony Mansfield had left the scene. Paul Waaktaar-Savoy confirms this side of the story: “We only had produced seven songs that we could present. We mixed five of them to their final version. He mixed the two others without telling us, for some reason.”