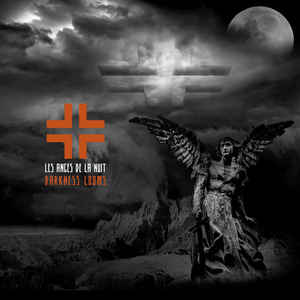 Background/Info: Richard Abdeni and Anthony Stuart set up Les Anges De La Nuit in 2003. This American duo got some recognition being directly signed to Infacted Recordings where they released two albums. After a hiatus of 9 years they struck back in 2015 self-releasing “Vanity Will Perish”. It’s now time for the fourth album of the band.

Content: The sound and influences of the band haven’t changed that much. Les Anges De La Nuit is inspired by a dark electro-pop format mixed with some future-pop elements. The main characteristic of the work are the lyrics sung now French and then in English.

The work is carried by strong melodic sequences. The last song of the album is a cool clubby-track. But there also is another song that will catch the attention for featuring Johan Hansson (We The North, Cyanide, Unitary).

+ + + : Les Anges De La Nuit aren’t reinventing the electro-pop standards, but I have to admit they’ve constructed a very own and recognizable sound. You rapidly recognize the melodic sequences and cool tunes. Some of the songs are driven by hard, pumping kicks, getting the work pretty danceable. Especially the last song, which is a remix of “Cette Jolie Brune” is a great apotheosis, but only available on the digital format of the album (and not on this CD). The French lyrics inject something special to the work, which you don’t exactly expect from an American formation.

– – – : My single point of discussion is the similarity between all songs. Once you’ve heard the first track of the work, you rapidly get the impression all songs are made from the same mold.

Conclusion: I belief that Les Anges De La Nuit is a band deserving more recognition. They maybe haven’t composed the ultimate ‘hit’ thus far although their work remains entertaining and different from the average electro-pop standards.

Since you’re here … … we have a small favour to ask. More people are reading Side-Line Magazine than ever but advertising revenues across the media are falling fast. And unlike many news organisations, we haven’t put up a paywall – we want to keep our journalism as open as we can. So you can see why we need to ask for your help. Side-Line’s independent journalism takes a lot of time, money and hard work to produce. But we do it because we want to push the artists we like and who are equally fighting to survive. If everyone who reads our reporting, who likes it, helps fund it, our future would be much more secure. For as little as 5 US$, you can support Side-Line Magazine – and it only takes a minute. Thank you. The donations are safely powered by Paypal.
Tags: Cyanide, Infacted, Les Anges De La Nuit