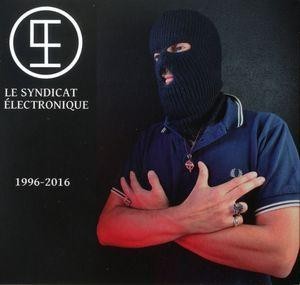 Background/Info: This album is a retrospective of Le Syndicate Electronique. The band was set up by Alaxis Andreas G (Alexandre Gand) and was mainly active during the early millennium years. Most productions were released on the band’s own label Invasion Planète Recordings. “1996-2016” is a selection of previously unreleased and rare songs that have been selected by the band and have all been remastered.

Content: This is not a ‘best of’-album, but a selection of rare material, which even the die-hard fans will enjoy. These controversial French projects always deal with a rather simplistic and especially minimal format of electronic music. The work has this delicious vintage flavor, which takes us back to early 80s electronic and purely analogue experiments. The retro sounding treatments evoke some good-old souvenirs and that’s for sure what has created a sense of fascination for the project -next to its controversial image. Le Syndicat Electronique has a kind of ‘f*** you’ attitude reminding me of the early industrial pioneers, who were composing ‘noise’ against the established music genres and pop-industry.

I can’t say that the unreleased songs are pretty exciting although a few little treasures have been recovered from the ashes. One of my favorite cuts is the previously unreleased “Losing Our Control”, which seems to be a song from 1998. This song features vocals while several songs remain instrumentals.

+ + + : I enjoyed the typical vintage format of some songs while I’ have a preference for the more elaborated cuts. The 2nd part of the album is more convincing.

– – – : A few tracks remain somewhat unachieved. I don’t have anything against ‘simple’ structures and the use of a few sound layers, but a little more elaboration would have been better. The artwork is not that really inspired.

Conclusion: “1996-2016” brings Le Syndicat Electronique back to life and it’s much better and more original than the usual ‘best of ‘ formula.

Since you’re here … … we have a small favour to ask. More people are reading Side-Line Magazine than ever but advertising revenues across the media are falling fast. And unlike many news organisations, we haven’t put up a paywall – we want to keep our journalism as open as we can. So you can see why we need to ask for your help. Side-Line’s independent journalism takes a lot of time, money and hard work to produce. But we do it because we want to push the artists we like and who are equally fighting to survive. If everyone who reads our reporting, who likes it, helps fund it, our future would be much more secure. For as little as 5 US$, you can support Side-Line Magazine – and it only takes a minute. Thank you. The donations are safely powered by Paypal.
Tags: Le Syndicat Electronique