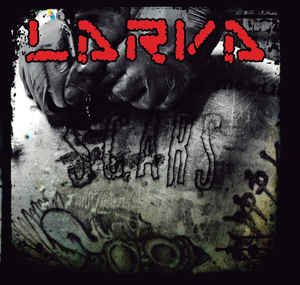 Background/Info: Larva officially started in 2003 and has released an impressive number of productions over the years. The new work from the Spanish duo reflects ‘the passage of time, and the damage done in our body and soul; during the years’. That’s what the title of the album is symbolizing.

Content: If you know the sound of Larva, you for sure expect a dark and tormented electro-format. “Scars” moves on there where previous work stopped. You get a new release filled with scary atmospheres, rough and angry vocals, icy sequences, cold leads and danceable rhythms. Most of the songs have been sung in English, but mastermind InqUesT is also singing his Mother tongue (what the band mainly did during the early years).

The main evolution with previous albums maybe appears in the more explicit synth lines. It feels a bit like “Scars” also wants to get back in time, using more ‘typical’ synth leads such as in the 90s.

+ + + : I wasn’t exactly a ‘fan’ of Larva in the early years. I often experienced the sound as stereotypical, but mainly unaccomplished. That’s precisely what the band has seriously improved during the past few albums. “Scars” is even moving a step further and rapidly appears to be a mature and well-crafted opus. The sound remains inspired by dark-electro standards, but in the end I always prefer a good copy of Suicide Commando instead of a boring and amateur-like ‘original’ composition. “Scars” is not exactly an emulation of Suicide Commando, but it will definitely appeal for fans of the Belgian master. The main –and interesting, evolution of this new opus appears in the great melody lines.

– – – : I think the main challenge for Larva could be to get a more personal sound instead of being compared to leading formations of dark-electronic music. “Scars” is a remarkable work, but you quickly get the impression it’s just one more work in a genre that is spoiled by similar albums for years now.

Conclusion: Larva is a band, which according to me has become a real reference in its genre. Originality is hard to find, but it’s 100% efficient!