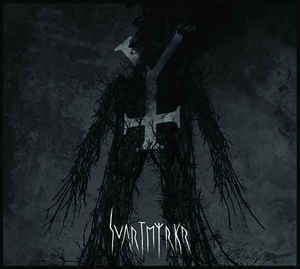 Background/Info: MZ.412 (formerly known as Maschinenzimmer 412) gained recognition as the so-called inventors of ‘black-industrial’ music. Set up in the late 80s by Henrik Nordvargr Björkk (Nordvargr, Pouppée Fabrikk, Anima Nostra ao), Jouni Ollila (Pouppée Fabrikk, Project-X ao) and Jonas ‘Drakh’ Aneheim “Svartmyrkr” stands for the ‘studio-resurrection’ of the Swedish giant. It’s the first new full length since “Internal Affairs” (2006). The album is inspired and dedicated to Northern mythology and more specifically to the hell of the North (cf. “Helheim”) and the Goddess ruling over it (cf. Hel).

Content: “Svartmyrkr” features 10 songs. After a short intro you might feel the sensation to really entering hell. Dark-oppressive sounds joined by ritual drones and growls (instead of vocals) are progressively joining a climax. It perfectly symbolizes the entire work, which is much more than a new ‘dark’ opus. MZ.412 knows the way to create tormenting music. Drones and orchestral arrangements mixed with vocals, which are sometimes like appealing for evil forces are emerging from the speakers. I noticed a guest contribution of Kristoffer Oustad on guitar.

+ + + : “Svartmyrkr” feels like moving throughout a sonic danger zone. The album has a strong visual appeal, but some of the faced images might feel like a totally surreal and horror-like vision. MZ.412 strikes back with extremely haunting work, which is the outcome of a sophisticated song writing. The tracks are progressively evolving towards multiple climaxes accentuated by the vocal parts. The overwhelming sound atmospheres make you feel forget reality to join the hallucinogenic space of Northern mythology. Drones and ritual passages only reinforce the total sensation of the work. I also want to say a word about the artistic digipak of this album, which is also available on vinyl and cassette format.

– – – : A few cuts can’t totally convince me, but that’s maybe because you can’t expect a new climax at each track.

Conclusion: This music is dangerous and might provoke a cardiac arrest or bring you into a higher state of consciousness. Well, I like taking some risks when it’s worthy to experience unique sensations!

Best songs: “She Who Offers Sorrow”, “Ulvens Broder” “Oppna Helgrind”, “We Are Eternal”, “Lokastafr Ablaze With The Thorns Of Death”.

Since you’re here … … we have a small favour to ask. More people are reading Side-Line Magazine than ever but advertising revenues across the media are falling fast. And unlike many news organisations, we haven’t put up a paywall – we want to keep our journalism as open as we can. So you can see why we need to ask for your help. Side-Line’s independent journalism takes a lot of time, money and hard work to produce. But we do it because we want to push the artists we like and who are equally fighting to survive. If everyone who reads our reporting, who likes it, helps fund it, our future would be much more secure. For as little as 5 US$, you can support Side-Line Magazine – and it only takes a minute. Thank you. The donations are safely powered by Paypal.
Tags: MZ. 412, Nordvargr, ritual