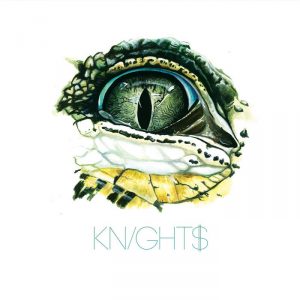 Background/Info: I discovered Knights by the self-titled debut-EP revealing a somewhat retro-like electro-pop style reminding me of bands such as Duran Duran, Alpha Ville ao. “Alligator” is a next release in the young history of this English project driven by James Knights (still involved with Scarlet Soho and also the new singer of Boytronic).

Content: “Alligator” is the perfect successor to the debut EP of Knights. The sound and influences both remain pretty 80s like while featuring an extra and somewhat post-disco touch on top. This EP makes me thing to the offspring between Donna Summer and Duran Duran.

Next to the title song you also get 2 remixes and a somewhat B-side cut. The remixes by Frend Ventura/Poalo Gozzetti and Jake Wiltshire are pretty different from the original version.

+ + + : Knights is a really interesting project with a great sound production. The little detail I was missing on the debut work has been added on “Alligator”. It’s a             great and catchy title song while both remixes are noticeable cuts. I have a little preference for the more minimal-minded remix by British artist Jake Wiltshire. I also enjoyed the B-side track, which has this little disco touch on top.

Conclusion: It’s maybe time now for Knights to unleash a first full length album; this artist has a great sound carried by a mature and high tech production.