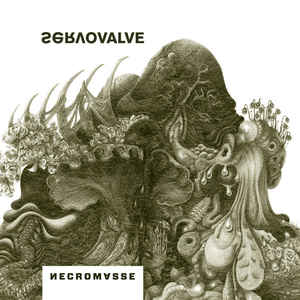 Background/Info: Servovalve is a French project, which already released a few productions, but seems to strike back at irregular basis. I’ve to say “Necromasse” isn’t really a new album as it was already released in 2016. I get this promo with some delay, but couldn’t resist reviewing this genius release.

Content: “Necromasse” is a without a shadow of a doubt an album that will appeal for lovers of unique sound treatments. The duo is mixing different influences, but the album is characterized by impressive sound blasts and multiple French spoken samples. It’s a minimal work and also pretty industrial-like.

+ + + : It’s been quite a long time ago a production took me this much by surprise. “Necromasse” is a production, which comes pretty close to perfection. I think perfection doesn’t exist, but there’re albums that come pretty close to it. And that’s precisely the feeling I got listening to this work. The sound creation is absolutely genius. It sounds totally vintage-like, but that’s also what makes analogue sounds that particular. But it also is a creative production mixing retro elements together with a great arsenal of influences. Industrial music has been never that intelligent or should I say that IDM never has been that masterly infused by industrial music. This digital version features 3 more songs than the CD version and the least I can say is that there’s not one single cut to throw away.

– – – : You can easily imagine when an album is that close to perfection there simply is nothing negative to mention! It’s just a pity this band remains rather unknown for so many people.

Conclusion: I remember the first time I heard Geomatic released on M-Tronic. This band left me breathless, reminding me why I’m that passionate by music and especially creative and inventive bands. That’s precisely what I experienced listening “Necromasse” as well.