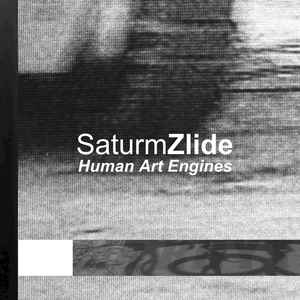 Background/Info: German artist Alexander Marco strikes back with the fourth full length album of his SaturmZlide project. SaturmZlide always has been a guarantee for heavy industrial sound assaults while this work has been announced as a ‘reinvention’ of the band’s sound.

Content: “Human Art Engines” still sounds very industrial and this definitely driven by this influence. But the global sound production has considerably evolved towards more sophisticated arrangements, great sound treatments –created by analog gear and dark grooves. You still can hear big kicks carrying the composition while being the perfect cure to make you dance.

+ + + : I totally agree the affirmation that Alexander Marco has reinvented his own sound. The composition became more elaborated and artistic. Notice by the way that some cuts have been mixed and engineered by Matthias Schuster (who worked with bands such as Bal Paré, In Namen Des Volkes, Das Institut ao). The result will take you by surprise. I like the IDM approach mixed with rough industrial bombast. The dark and somewhat technoid inspired grooves totally fits with the heavy industrial rhythmic. I also noticed some acid-like treatments, which have been exposed to a few sounds. There also is a great progression running through this work, which is slowly gaining a great climax during the final cuts.

– – – : A few short duration tracks can’t totally convince me. It feels like they remain unaccomplished compared to the main part of this work.

Conclusion: SaturmZlide strikes back with a sonic bomb, which is made of power and sound intelligence. This is one more great production from the 2017 Hands vintage!

Since you’re here … … we have a small favour to ask. More people are reading Side-Line Magazine than ever but advertising revenues across the media are falling fast. And unlike many news organisations, we haven’t put up a paywall – we want to keep our journalism as open as we can. So you can see why we need to ask for your help. Side-Line’s independent journalism takes a lot of time, money and hard work to produce. But we do it because we want to push the artists we like and who are equally fighting to survive. If everyone who reads our reporting, who likes it, helps fund it, our future would be much more secure. For as little as 5 US$, you can support Side-Line Magazine – and it only takes a minute. Thank you. The donations are safely powered by Paypal.
Tags: SaturmZlide, Technoid