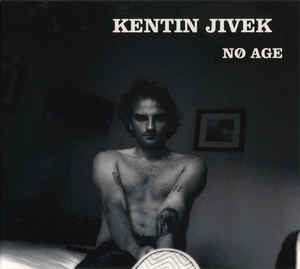 Background/Info: Parisian based artist Kentin Jivek has already been active for a couple of years now and can look back on a growing discography. This new opus is the 8th full length of the French artist while he also accomplished a few more productions together with other artists like The Hare And The Moon and Miro Snejdr. “No Age” is the first album he released on Manic Depression Records.

Content: The sound of Kentin Jivek has seriously evolved throughout the years although remained faithful to the main influences based upon dark atmospheres and neo-folk. “No age” doesn’t sound those different, revealing mysterious sound atmospheres, which might remind you of the sonic ambiance from “Twin Peaks”. There’s a solid cinematographic style running through the songs.

Next to the dark and obscure ambiance this album is also characterized by the charismatic vocals of Kentin Jivek. His timbre of voice makes me a little bit think of a hybrid between Brendan Perry and Dave Gahan. The songs have been sung in English- and in French revealing a kind of dark- and somewhat intellectual poetry approach.

+ + + : “No age” is a delicate release filled with dark reverie and melancholia. This feeling is accentuated by intriguing atmospheres making the sound darker and darker. Kentin Jivek has created his own sound and perception of neo-folk mixed with ambient music. His charismatic vocals remain one of the main strengths of the work. There are many cool songs, but I have a preference for the “Twin Peaks”-like “Never Ending Love”. The minimalism of the arrangements is absolutely worthy of examination.

– – – : The dark poetry sometimes becomes a bit pompous, but it definitely is a part of this artist. Some of the most experimental passages can’t totally convince me.

Conclusion: I haven’t heard all of Kentin Jivek releases, but “No Age” is one of the best that I have heard. This is an album featuring a very own style and an artist with a captivating timbre of voice.