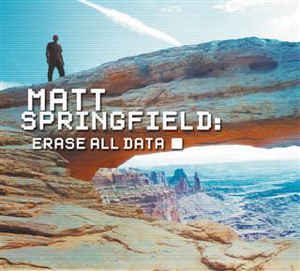 Background/Info: Matt Springfield is a French artist inspired by different artists from the 90s. It’s not that usual that I decide to review an album that was originally released a few years ago, but sometimes you’ve got to give artists a little push. “Erase All Data” indeed was released in 2012 (!) on a so-called crowdfunded label so promotion and distribution is not always an easy thing.

Content: The main sources of inspiration clearly sound 80s-like. The main influence and basis of the work is driven by pop music. The guitar adds a rock touch on top resulting in a few solid rock-pop songs.

The synth parts are often melodic and sometimes moving on the edge of ‘commercial’ pop music. There also is an indie touch running through the songs. The final cut is a club-orientated remix by People Theatre, which remixed one of the main songs (and previously released as single) “Things I’ve Said”. Notice by the way there also is a video of “Things I’ve Said” as little bonus.

+ + + : I especially like the final part of the album revealing more indie-like songs, which reminds me a bit of Big Country for the guitar playing and an offspring between Mesh and The Nine for the great and carrying choruses. “Things I’ve Said” definitely is a great piece of music, but I also have to tip “Haunted” while the remix by People Theatre is a cool, danceable apotheosis. Matt Springfield is a talented singer with the right voice for pop music.

– – – : Some songs at the beginning are easy listening pieces, but they also sound a bit hesitant, just like a band in search of sound identity. These songs are missing the carrying choruses, which you’ll find back on the final cuts.

Conclusion: There are a few interesting ideas running through this album, which sounds refreshing. It’s a perfect symbiosis between 80s influences and a more contemporary production.

Since you’re here … … we have a small favour to ask. More people are reading Side-Line Magazine than ever but advertising revenues across the media are falling fast. And unlike many news organisations, we haven’t put up a paywall – we want to keep our journalism as open as we can. So you can see why we need to ask for your help. Side-Line’s independent journalism takes a lot of time, money and hard work to produce. But we do it because we want to push the artists we like and who are equally fighting to survive. If everyone who reads our reporting, who likes it, helps fund it, our future would be much more secure. For as little as 5 US$, you can support Side-Line Magazine – and it only takes a minute. Thank you. The donations are safely powered by Paypal.
Tags: Matt Sprinfgield, Mesh