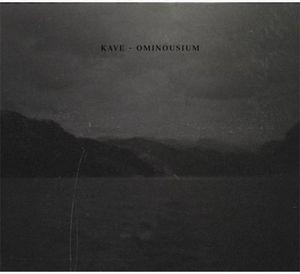 Content: Three years after the debut album “Dismal Radiance”, Kave joined the Cyclic Law roster to unleash a new dark opus of ambient music. This new work composed by Bram Gollin has been introduced as reflecting ‘on a mental and physical hardship and serves offers a glimpse into past periods and events, bringing to light hidden states and emotions.’

Behind this inspiration you can feel the adaptation into a dark musical journey. “Ominousium” features 6 tracks, which are quite similar to each other and mainly based upon a heavy, overwhelming sound atmosphere revealing vibrating sonorities. Multiple noises –like field recordings, have been mixed with the obscure vibes running through the work. It feels a bit like a snow ball growing into a merciless avalanche. “Ominousium” is a kind of imaginary sonic cataclysm when played at maximum volume will make tremble all things around you.

The composition doesn’t really feature much diversity, but this somewhat monotonous universe remains however a fascinating experience. The work has this magic visual appeal, which like a mirror reflects the deepest frights of the listener. Both opening cuts are poignant illustrations of this visual power, but there also is a great progression in the structure leading to a final climax.

The title track, which also is the last one of the album, will hold you in its grip for more than 12 minutes and will progressively lead you in an ultimate vision of horror.

Conclusion: “Ominousium” is not really adding new elements to the dark-ambient genre, but it remains a well-crafted production in the genre. I especially like the impressive, vibrating and obscure sound waves of this work.

Best songs: “The Tribes Of Nyx”, “A House Amongst The Weeds”, “Ominousium”.