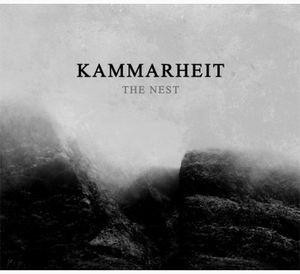 Content: “The Nest” is the first real new studio album of Pär Boström (aka Kammarheit) in 10 years. But Kammarheit already took us by surprise earlier this year by the 6-CD box “Unearthed 2000-2002” while he also contributed to the “Onyx”-album revealing a great collective work featuring Atrium Carceri and Apocryphos (released by Cryo Chamber).

But we now welcome 9 new compositions inspired by ‘a subterranean journey through enormous halls of unfathomable depths’. The least I can say is that it all sounds a bit that way, like the visual transposition of ghost-like images into the simple magic of music. “The Nest” is an imaginary exploration throughout the complex labyrinth of our imagination where emotions got visualized. The composition has this fascinating power to awake our emotional fields.

This is a great exploration of dark-ambient atmospheres, which have been created by a sonic canvas of heavy, vibrating sounds. The low sound manipulations have to be played at a higher volume to catch the essence of the work leading the ambient music freak into a chilling sensation. The work sounds like a frightening rite for the death. And the more this work becomes dark the more it becomes enchanting as well. The sound concept is quite linear, but totally efficient. This is the kind of work that might create a truly paranoia, the work progressively getting pretty tormenting. But that’s still one of the main and required elements to speak about a successful dark-ambient work.

Conclusion: All I can say is that Kammarheit is definitely back, releasing a poignant and freaky opus diabolicum.