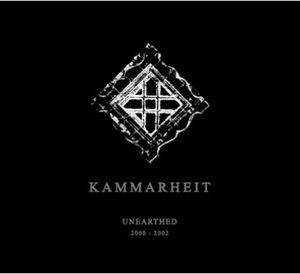 Content: Pär Boström aka Kammarheit is an artist who gained a huge reputation as the master of dark-ambient music. The man already released a few noticeable albums, but brings us now a real surprise with this box featuring 6 albums.

I first thought it was a kind of retrospective reassembling his previous releases plus some exclusive material, but “Unearthed 2000-2002” reveals 6 previously unreleased albums that were recorded between 2000 and 2002. These records were not exactly meant to be released. Behind this work hides a kind of cure helping Pär Boström during his insomnia. He only shared the music with some of his friends, but years later now all has been finally released.

The 1st album “Shockwork” brings us back to the early beginning of Kammarheit. It consisted of field recordings of an empty factory, which the same night were manipulated and transposed into a dark-ambient opus. You clearly will recognize the main characteristic of the project, which deals with multiple field recordings. It all sounds pretty freaky and yet intimate. It reveals a pure kind of ghost-music where the basis of field recordings has been empowered and in a way brings to life by the addition of electronic sounds and spooky vocal fragments. It sounds pretty experimental and soundscape-minded while spiced by a few industrial sound treatments. I especially like the impressive arsenal of sounds and noises that have been used to create this obscure and desolate sound resulting in a few noticeable cuts and the absolute masterpiece –and title-track “Shockwork”.

“Among The Ruins” is the 2nd disc featured in this box, which moves on the soundscape and cinematographic style of the global work. There’s a great progression running through some cuts, “Maskinpark” being for sure one of the highlights here. There again is a strong visual appeal emerging from this track, which sounds a bit like the imaginary opening mouth of the underworld.

Kammarheit clearly appears to be a sound coming from a distant galaxy, which is the brainchild of the musician’s insomnia. He invites the listener to share his tormented thoughts expressing a freaky vision when you hear the screaming babies in “Self-Destruction & Isolation.” The obscure part of the work also reveals a somewhat melodic approach on “Gork Me.” This album finally gets back to pure soundscape creations, which become reinforced by industrial components and a few blasting sounds on the cool “Skavd Moskva.”

“At The Heart Of Destruction” is my favorite disc from the box. Kammarheit reveals great sound treatments and monstrous sounding manipulations resulting in genius cuts, but especially the overwhelming “Amorphous.” This is an outstanding piece of dark-ambient music, which will leave you stupefied. I also have to mention the mysterious “Morgonspill” and the somewhat ritual inspired “R’lyeh.” You really can feel the loneliness reflected on, “Morning Tower,” which is another great piece of music. This is the kind of album the dark-ambient lovers really have to discover and one of the best hidden secrets from Boström’s creative mind.

The 4th disc “Somewhere Concealed” doesn’t really bring that much new, but you can expect a new fantasy voyage through chilling sound forms. The work again is accomplished by field recordings and industrial treatments. It sometimes becomes pretty experimental, but at the other side, also an intimate and fictive view of the composer’s mind. You clearly can imagine feelings of solitude and despair. The night engulfing a man’s soul with a freaky impression of angst. “Making The First Flower” sounds like a title of hope although it appears to be an expression of despair. “Back To Where The Trees Spoke” only confirms the desolation emerging at the surface of this creation.

Both last albums “The Downfall And The Arising” and “The Northern Hymn” are similar and I dare to say less diversified. Both releases are exploring the limits of dark soundscapes revealing aquatic sounds and dark humming vibrations. The work becomes more experimental and still extreme although totally faithful to the Kammarheit sound formula. I’ve a preference for the last album revealing a few more noticeable tracks. “Dreaming Of the Forgotten Land” definitely is one cut that caught my attention, but where the image of a ‘dream’ rapidly turns into a nightmarish sound experiment. The final cut “Presence Within the Dark” is the ultimate dark creation of this massive release.

Conclusion: This is an essential release for the fans of Kammarheit. You get a total of 43 tracks, which can possibly become a good, but freaky company during a night of insomnia. The night remains a very inspiring moment and it would have been a shame if this work of Kammarheit would have never seen the light of day…

Best songs: “Shockwork”, “Maskinpark”, “Gork Me”, “Amorphous”, “Morning Tower”, “Morgonspill”, “Frigid”, “Back To Where The Trees Spoke”, “Making The First Flower”, “Dreaming Of The Forgotten Land”, “Presence Within The Park”.