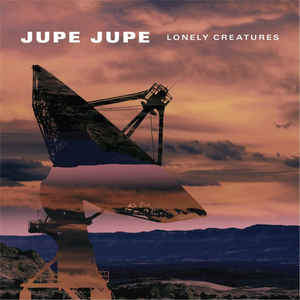 Background/Info: Based in Seattle (USA) Jupe Jupe consists of Bryan Manzo, My Young, Patrick Partington and Jarrod Arbini. They previously self-released 3 other full lengths and now strike back with “Lonely Creatures”, which is also available on vinyl format.

Content: Jupe Jupe claims to be influenced by a wider range of bands and that’s an element that comes rapidly through. There clearly is something 80s running through their work, which sounds in between new-wave and pop music and reminds me now and then to Tears Of Fears and Q. Lazzarus. But there also is something more indie-like. Electronics and guitar are totally complementary while the singer has a very particular timbre of voice.

+ + + : Jupe Jupe sounds refreshing and that’s probably for their mix of good-old retro elements from the 80s and something contemporary on top of the production. There also is a perfect balance between the verses and the choruses. “Lonely Creatures” features a few elevating cuts and I especially recommend “Blind “By Memory” and “In Reflection”. Jupe Jupe is taking care for nearly all elements from the production process;  from song writing to promotion and I can only congratulate the very professional work.

Conclusion: “Lonely Creatures” is a fully enjoyable production reflecting a mature production and a sound that will appeal for wave-pop fans and indie-lovers. This is a band to discover!

Since you’re here … … we have a small favour to ask. More people are reading Side-Line Magazine than ever but advertising revenues across the media are falling fast. And unlike many news organisations, we haven’t put up a paywall – we want to keep our journalism as open as we can. So you can see why we need to ask for your help. Side-Line’s independent journalism takes a lot of time, money and hard work to produce. But we do it because we want to push the artists we like and who are equally fighting to survive. If everyone who reads our reporting, who likes it, helps fund it, our future would be much more secure. For as little as 5 US$, you can support Side-Line Magazine – and it only takes a minute. Thank you. The donations are safely powered by Paypal.
Tags: Jupe Jupe