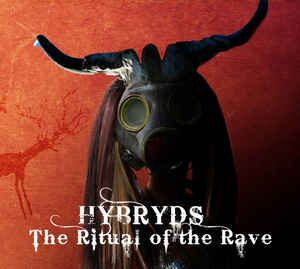 Background/Info: Polish label Zoharum has something really particular with Belgian ritual/industrial formation Hybryds. “The Ritual Of The Rave” originally released in 1995 on Daft Records is the sixth album of this band getting a re-issue on Zoharum. The album has been remastered by Peter De koning aka TraumaSutra (still a live member of Hybryds) while Sandy Nijs (aka Magthea) did the mastering of the extra disc featuring live recordings, unreleased material and tracks originally released on compilations.

Content: I personally consider “The Ritual Of The Rave” as one of the most essential releases in the impressive Hybryds catalogue. It maybe also was the album announcing a new era and sonic direction for Hybryds although the band always remained faithful to an omnipresent ritual and industrial sound.

Ritual percussion and mystic chants by Yasnaia lead the listener into a state of trance, but some songs also reveal a more diversified sonic canvas. Cinematographic passages and electronic treatments have been featured as well.

The second disc is somewhat different. The ritual inspiration is there, but Hybryds clearly moves into experimentalism. It’s an interesting disc, which will make you also discover experiments in dub and electronic minimalism.

+ + + : Ritual music is often linked to industrial- and electronics formations, but Hybryds remains a reference when it comes to the truly signification and essence of this genre. This album belongs to the jewels in the genre. But it’s not only about ritual music properly speaking, but also a work revealing a great song writing revealing multiple little details and an authentic character.

The second disc is a nice addition to the work. It’s more diversified and definitely experimental. I here especially like the dubby approach at “Joy Of The World”.

– – – : I’m less convinced by some of the heaviest experiments cuts featured on the extra disc, but at the other side it also is the right place to feature these kinds of compositions.

Conclusion: I really had an immense pleasure rediscovering this album of Hybryds I’ve never forgotten, but not played in years.