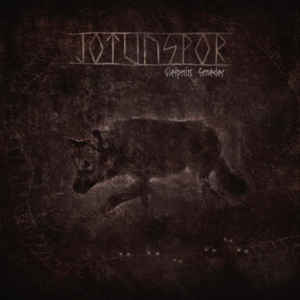 Background/Info: The album “Gleipnirs Smeder” by Jotunspor was originally released in 2006 (!) on Satanas Rex (UK) and Candlelight Records (USA). Two years later (2008) the album got a re-release as a vinyl on Temple Of Darkness Records. The album was the first release on Satanas Rex, which is/was a black-metal division of Cold Spring, which now again has re-released the album. Jotunspor is a Norwegian duo featuring ‘King’ and ‘Kvitrafn’. Both members have been involved with different bands while they both were members of Gorgoroth.

Content: The ‘metal’ roots of both members rapidly emerge at the surface. Dark guitar playing and a furious cadence have been joined by enraged vocals. It creates the main substance of this work, which is just interrupted by a rather dark-soundscape cut filled with humming blasts while another track is more into death-industrial influences.

+ + + : Jotunspor created an obscure sonic universe inspired by old Norse cults and beliefs. It has been transposed into a sonic mayhem, evoking a giant drill driven by hardcore cadence. The album creates a sonic wall, which is just interrupted by the soundscape-like “Svartalvheims Djup” and “Solartjuven”, which sounds a little bit death-industrial like as well. I personally prefer this ‘softer’ side of the work.

– – – : Black-metal music is an extreme sensation to me and not exactly the kind of music that captivates me.

Conclusion: “Gleipnir Smeder” is a truly sound cataclysm; an extreme experience in sound, which is intended to please the true lovers in the genre.

Since you’re here … … we have a small favour to ask. More people are reading Side-Line Magazine than ever but advertising revenues across the media are falling fast. And unlike many news organisations, we haven’t put up a paywall – we want to keep our journalism as open as we can. So you can see why we need to ask for your help. Side-Line’s independent journalism takes a lot of time, money and hard work to produce. But we do it because we want to push the artists we like and who are equally fighting to survive. If everyone who reads our reporting, who likes it, helps fund it, our future would be much more secure. For as little as 5 US$, you can support Side-Line Magazine – and it only takes a minute. Thank you. The donations are safely powered by Paypal.
Tags: Jotunspor, Mayhem