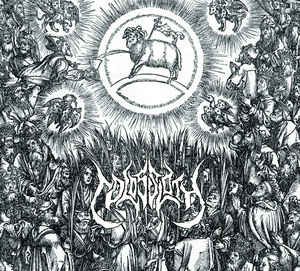 Background/Info: After a few albums released on CDR and vinyl, this is the second official CD released by Leicester (UK) based solo-project Colossloth.

Content: Colossloth experimented with a wide arsenal of influences, moving from heavy industrial outburst towards dark, dreamy cinematographic passages. It can be now a bit relaxing and next abstract and into experimentalism to finally reach a heavy industrial/noise style. “Heathen Needles” is an album bringing extremes together.

+ + + : There’s a huge diversity of influences running through this work, but the artist seems to feel comfortable with most of these influences. I enjoy the somewhat psychedelic-noise driven title track, but still the more ambient and abstract-like “We Had A Pact” and the more industrial orientated “Forcing The Error”. I also noticed a kind alchemy in the sound treatments like an artist who’s decomposing and reconstructing sounds. So in the end it’s an album that might please numerous freaks of extreme music genres.

– – – : I don’t have any problem with the diversity of the work, but I can imagine some listeners will miss coherence. There’s a huge contrast between some of the influences, but we all have to admit it can be still seen as a rather positive aspect.

Conclusion: “Heathen Needles” makes me think to a compilation revealing the wider sound canvas Colossloth is driven by.

Best songs: “Heathen Needles”, “We Had A Pact”, “A Place Where Your Dreams Can Die Alone”.