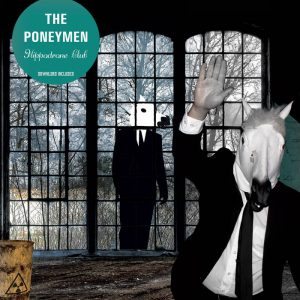 Background/Info: “Hippodrone Club” resulted from the common efforts between Josette Ponette (Josy & The Pony) and members of The Poneymen. The main particularity of this band and album is that it all deals with a surreal theme around pony’s and horses.

Content: Belgium is the country of surrealism and “Hippodrone Club” is for sure one of the latest artistic creation in the genre. It’s hard to define the style of the band, but there’s a mix between punk-, rock- and pop influences. In the end I would say there’s no real style, but the main element is just ‘fun’.

It however resulted in a great piece of music mainly driven by the crazy stories sung in French by Josy. Some songs are getting us back to 60s reminiscences creating a somewhat psychedelic feeling. The work is driven by guitar but also features some electronic treatments.

+ + + : This album is weird, but absolutely delicious and fascinating. I like the global concept and most of the songs mixing punk, rock and pop together. The 60s flavor emerging from a few psychedelic-like cuts are vaguely evoking Brigitte Bardot (as a singer), but this band can be also seen as the ‘rock’ answer to Simi Nah. The songs are not only crazy, but also pretty sexy.

– – – : I can imagine this band will be mainly considered and loved in their homeland and other French-speaking countries. I noticed one single song featuring English lyrics sung with a sexy, delicious accent. The language will maybe become an obstacle to reach a wider audience and that would be a pity. The album features 10 songs and I really would have loved to hear 10 more songs.

Conclusion: Josy & The Pony vs The Poneymen is a kind of revelation. They don’t bring anything new and somewhere remind me to the offspring between French punk and 60s psychedelia, but it simply works! I can imagine this band on stage must be totally ‘fun’ and party-like!

Since you’re here … … we have a small favour to ask. More people are reading Side-Line Magazine than ever but advertising revenues across the media are falling fast. And unlike many news organisations, we haven’t put up a paywall – we want to keep our journalism as open as we can. So you can see why we need to ask for your help. Side-Line’s independent journalism takes a lot of time, money and hard work to produce. But we do it because we want to push the artists we like and who are equally fighting to survive. If everyone who reads our reporting, who likes it, helps fund it, our future would be much more secure. For as little as 5 US$, you can support Side-Line Magazine – and it only takes a minute. Thank you. The donations are safely powered by Paypal.
Tags: Josy & The Pony vs The Poneymen