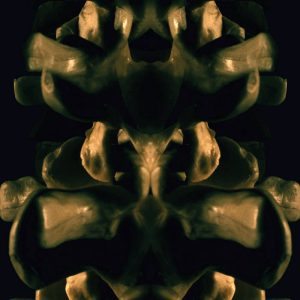 Background/Info: “Gobbledegook” is the second album of Hexenschuss. This duo consists of Gil Luz (The Netherlands) and Assi Weitz (Israel). They both are quite experienced artists who are active in other music projects as well. Gil Luz is taking care for all the keyboards while Assi Weitz is playing the drums.

Content: There clearly is an omnipresent experimental approach in the work of Hexenschuss. The raw electronic treatments are pretty vintage-like although other cuts are more into explicit psychedelic sound creation. There’s a mix between numerous influences and it’s really impossible to define the real sound of this band. In the end it all remains a kind of experiment between electronics and real drums.

+ + + : The electronic treatments are especially amazing on the opening cuts. You get the impression of a real sonic architect is as sitting the work. The real drums add a somewhat unexpected, but dynamic and especially technical dimension to the sound. The most typical aspect of this band for sure remains their original approach and a unique style, which is hard to label, but which might catch the attention of a wider audience.

– – – : The duo voluntary chose to keep all songs instrumental and that’s maybe a pity as a few vocal lines would sometimes add a real bonus getting the work more accomplished. The opening cuts are interesting and especially the raw sound treatments are cool, but it all stagnates and starts to repeat itself after a while.

Conclusion: The main strength from Hexenschuss definitely hides in their global sound approach although I expected a bit more from the result properly speaking. You can feel there’s much more potential in this band than what comes out on “Gobbledegook”.