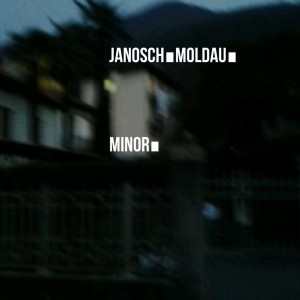 Background/Info: Janosch Moldau is a German artist who’s already been busy for more than 10 years. “Minor” is the fourth full length by the artist that was released during 2015. Janosch Moldau is progressively getting more recognition and name although it’s not exactly one of the leading electro-pop names. I think “Minor” deserves some extra exposure and that’s why I made this review.

Content: Janosch Moldau has always stood for electro-pop with a huge load of melancholia. “Minor” doesn’t sound that different although I noticed a global evolution in songwriting and production.

The songs are evasive and mainly carried by solid and melodic leads. The cadence remains pretty slow, but sometimes danceable. The sensitive touch of the work is also reinforced by some piano arrangements injecting an extra melancholic flavor. It totally fits with the somewhat lamenting way of singing.

+ + + : I remember some early work of Janosch Moldau, which left me totally unmoved and even a bit skeptical about the potential of this band. “Minor” reveals a mature production composed by an artist who improved most of the aspects of his production. Janosch Moldau even creates a unique pop-style, which is dominated by melancholia. It’s not exactly the kind of electro-pop that will make you happy although it’s an evasive sensation on, which you can dream away. There are a few sublime songs featured on “Minor” and I especially recommend “Jesus Denies” and “State Of Hurt”.

– – – : Janosch Moldau will never become a catchy electro-pop formation. There’s no real space for happy tunes and easily remembered choruses and that’s maybe one of the single points I’m missing. Janosch Moldau invites the listener to join in and wave on a dense sonic ocean of sorrow where all the songs sound a bit similar.

Conclusion: If you like electro-pop with ‘pathos’ you definitely will love “Minor”, which is driven by a flow of melancholia.