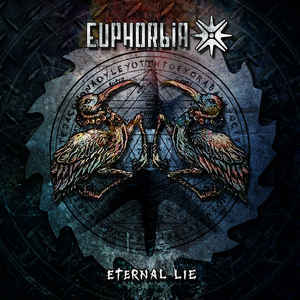 Background/Info: Euphorbia is a Brazilian duo consisting of Cirion Barboza and
Ulisses Righi. The band has already been active since 2005 and has self-released a few productions. “Eternal Lie” is an album featuring songs the band already played live for a couple of years now. The tracks have been reworked and recorded resulting in an album of 10 songs plus 2 remixes.

Content: From the very notes and sequences it rapidly becomes clear Auphorbia is inspired by harsh electronics, which will remind you of bands like Acylum, Wumpscut, Hocico, Mordacious and even Kraftwerk.

The opening cuts are okay, but nothing groundbreaking. Quite progressively the album reveals more efficient cuts driven by punching rhythms and haunting electro atmospheres. The haunting approach of the sound is mainly reminding me of Wumpscut and Acylum although there also is a little and more sophisticated passages, which sound like a dark approach of Kraftwerk.

The remixes were accomplished by Nahtaivel and Ulisses Righi (who also did the mixing and mastering).

+ + + : After a rather hesitant start it takes a few songs before Euphorbia really reveals an interesting potential, which will please lovers of (h)el(l)ectronics. “Memento” and “A Doom From The Stars” both are great pieces of music carried by solid leads. I also fully enjoyed the surprising “Under The Spell”, which sounds like Kraftwerk contaminated by a dark-electro virus. The remix of Nahtaivel also is a noticeable cut.

– – – : Euphorbia is not reinventing the dark-electro genre and the debut songs are not that convincing. They’re missing some power, which luckily has been progressively improved during the final part.

Conclusion: Euphorbia appears to be a talented pupil from the Wumpscut and Acylum class. The sound doesn’t reveal any surprises although guarantees a few cool cuts.

Since you’re here … … we have a small favour to ask. More people are reading Side-Line Magazine than ever but advertising revenues across the media are falling fast. And unlike many news organisations, we haven’t put up a paywall – we want to keep our journalism as open as we can. So you can see why we need to ask for your help. Side-Line’s independent journalism takes a lot of time, money and hard work to produce. But we do it because we want to push the artists we like and who are equally fighting to survive. If everyone who reads our reporting, who likes it, helps fund it, our future would be much more secure. For as little as 5 US$, you can support Side-Line Magazine – and it only takes a minute. Thank you. The donations are safely powered by Paypal.
Tags: Acylum, Euphorbia, Hocico, Kraftwerk, Nahtaivel, Wumpscut