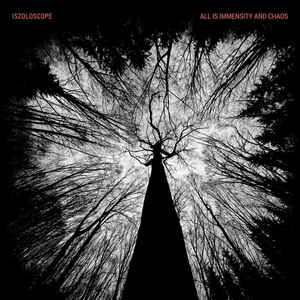 Content: Seventeen years after his debut work Iszoloscope has seriously involved in style. This new opus reveals a very eclectic composition, which is still driven by impressive dark atmospheres, but still touching ground with other sources of inspiration. The tracks are driven by solid beats and sometimes moving into breakcore experiments. You also will hear intriguing and somewhat ritual chants passages.

+ + + : The opening cuts of this work reveal a modern and powerful industrial sound approach. The tempo is fast and the kicks are murderous. It creates a heavy and violent sensation, which is reinforced by impressive sound blasts, reminding us that Yann Faussurier is a talented producer when it comes to create single sound treatments. The work has been supported by great atmospheric sounds, which always has been one of this project’s trademarks. The title track and “Spirit Intrusion”, both are absolute attention grabbers.

– – – : The album features 8 tracks and especially the few last songs can’t convince me a similar way. These cuts feel a bit like Iszoloscope started to experiment with very different ideas, like a bit losing the focus emerging from the great debut tracks.

Conclusion: Iszoloscope strikes back with an opus featuring a few outstanding cuts, but still revealing a final part without real climax. “All Is Immensity And Chaos” however is an album I highly recommend.

Best songs: “Spirit Intrusion”, “All Is Immensity And Chaos”, “Stretched Into The Thereafter”.