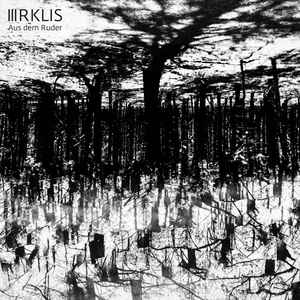 Background/Info: Before Irklis there was Forma Anonym and next Audioscope, which was a German formation set up in the late 80s. After a long silence Audioscope came back to life in 2014 under the new name Irklis. 3Aus Dem Ruder” is the band’s third official work for which they joined hands together with Sleepless Records (label of Eric van Wonterghem).

Content: The main link between the sound of Audiotrauma and Irklis remains the sound inspiration. It remains a pretty minimal electro basis, which however remain more sophisticated and experimental since the Irklis period. The tracks reflect numerous sound treatments, manipulations and experimentalism. But at the other side you also will notice evasive passages, delicate piano arrangements and dark electro spheres. Some of the cuts might remind you of the sound intelligence of Clock DVA, which I think is much more than simply a reference.

+ + + : I like the dark atmospheres hanging over the compositions. The minimalism and global sound intelligence the songs have been made with both are the main characteristics and strength of Irklis. This is a band with a very proper sound DNA, which can be linked to IDM. It first of all is a band you can’t compare with another one. It’s a fascinating experience and the kind of music that will ravish all fine tasters. Irklis belong to this selected group of visionary electronic artists.

– – – : The other side of the coin with original- and other visionary bands is that they aren’t always dealing with the most accessible music format. It’s not that easy to catch the sound of Irklis because it’s less comparable and that’s often what music fans need when listening to music.