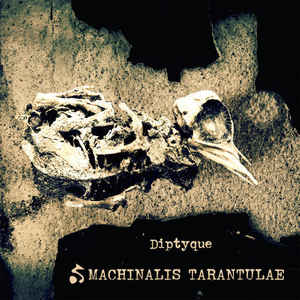 Background/Info: “Distyque” is the second album released by Machinalis Tarantulae. The band was originally set up by Justine Ribière in 2014 and later on joined by Miss Z (Punish Yourself) who contributed to the writing of this new opus.

Content: The least I can say is that this is an original and artistic composition. The main characteristic of Machinalis Tarantulae is the use of an electric viol de gamba, which has been connected to multiple stereo effects. It however creates a dreamy-like and somewhat medieval-orientated sound. This sound has been mixed with harder guitar play, electronic arrangements and industrial beats. The vocals are moving from enigmatic and somewhat bewitching ethereal parts towards harsh male vocals.

+ + + : What I especially like on this album is the original part. This band clearly tries to innovate, mixing medieval and ethereal elements together with rather classical electro-industrial parts. The harder side of the production clearly reminds to Punish Yourself, which remains another original formation. Machinalis Tarantulae is bringing somewhat opposites genres together. The result is matching and revealing multiple cool songs. It also is a well-crafted album.

– – – : Innovative and visionary artists aren’t always the most recognized ones. “Distyque” sounds a bit as a challenge revealing a style, which is hard to label and clearly covering a wide range of influences.

Conclusion: I heard multiple noticeable productions during 2017, but this one definitely belongs to the most original ones. Machinalis Tarantulae is a band to keep an eye on, but also confirming the good taste of Audiotrauma.

Since you’re here … … we have a small favour to ask. More people are reading Side-Line Magazine than ever but advertising revenues across the media are falling fast. And unlike many news organisations, we haven’t put up a paywall – we want to keep our journalism as open as we can. So you can see why we need to ask for your help. Side-Line’s independent journalism takes a lot of time, money and hard work to produce. But we do it because we want to push the artists we like and who are equally fighting to survive. If everyone who reads our reporting, who likes it, helps fund it, our future would be much more secure. For as little as 5 US$, you can support Side-Line Magazine – and it only takes a minute. Thank you. The donations are safely powered by Paypal.
Tags: Machinalis Tarantulae