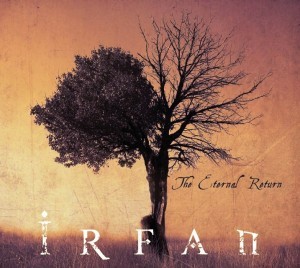 Irfan instantly became one of Side-Line’s favorite bands. “The Eternal Return” is their first full length since “Seraphim” (2007). Right after the second full length (2007) they started working on new marterial, but the main part of the work has been accomplished over the last 2 or 3 years. Meanwhile they were also touring in Europe and were composing and recording music for several Bulgarian movies, TV documentaries and theatre productions. The recordings of “Seraphim” coincided with the withdrawal of their original female singer Denitza Seraphim and during this period of time Irfan were working with several different female singers. The trigger to start writing “The Eternal Return” was actually pulled twice. We asked a few questions to Kalin Yordanov.

The album is available now – get yours here!

SL: Tell us a bit more about the diversified musical- and cultural influences featured at “The Eternal Return”?

Kalin Yordanov: I believe that due to all these peculiarities the new album was based on a very sincere and personal quest for our own identity as a band and as individuals. Throughout the whole creative and working process we really tried to return to our roots and to our basic and primary sources of inspiration: the folklore and the sacred musical traditions of the Balkans, The Middle East and the Mediterranean along with the Early music of Western Europe and Byzantium have always been an inspiration for us but with the new album I think that somehow we managed to blend all these diversified musical- and cultural influences with this deep inner necessity of ours to reach our roots, to find our own identity, to return to our true essence. And I believe that the result of this attempt is our most authentic opus so far.

SL: I can imagine the recording of the album featuring multiple musicians and instruments has been a long and complex process. What do you keep in mind from the studio work and what have been the main differences with both previous albums?

Kalin Yordanov: The whole creative and working process was much different, longer and harder than our previous experience. The recordings and the post production took us around 2 years. From the very beginning till the very end we faced and surmounted many obstacles and ordeals of all kinds.
But all this made the creation of the new album even more memorable and special for us. Unlike the previous albums where the music was written jointly by Ivaylo Petrov, Denitza Seraphim, Kiril Bakardjiev (who meanwhile left the band in 2008) and I (Kalin Yordanov), now Denitza is only a featuring artist and had less active role in the creative process while the composer core for the new album “The Eternal Return” was formed by Ivaylo Petrov and I with the essential support by Yasen Lazarov (who joined the band in 2008). Of course all this reflected on the whole concept and the sound of the new album, thus creating a new identity of our music.

SL: How did you get the idea to cover the famous Dead Can Dance-song “Salamander” and what has been the reaction of Brendan Perry?

Kalin Yordanov: Dead Can Dance has always been a great inspiration for us but the idea to cover a song of theirs came much later, sometime after the release of our second album. Actually we were never tempted to cover one of their most popular album songs.

We decided to cover a less known and rare live song from their tour in 1993. It’s a 2 minute piece during the final credits of “Toward the Within” DVD. We found it challenging to cover and even to extend and develop this rare and nameless short track by DCD.

When we talked to Brendan Perry about it he liked the idea to record this cover and to extend the song and after listening to the first rough sketches of the recordings he kindly gave us not only his approval but himself even entitled the song “Salamander”. That was really very kind of him and we are truly grateful. I believe that he found a very suitable and symbolic name for the song.

SL: How do you try to bring your music on stage and what does it mean for you to perform in front of an audience?

Kalin Yordanov: With the release of the new album we will start a small tour in 2015/2016 to promote “The Eternal Return”.

Performing live has always been a part of our musical journey and a special experience for us and now we have a really good reason to finally celebrate the new release together with our fans. The feeling during our concerts is sometimes really intimate, emotional and even kind of sacred and sharing this energy with the audience could really be an intense experience.

The album is available now – get yours here!