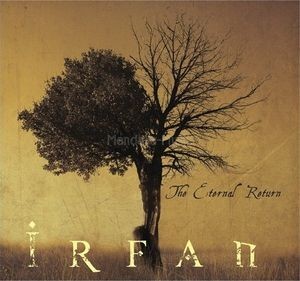 Content: New albums released by Prikosnovénie have become rather rare, but this new opus by Bulgarian Irfan is a release which caught my attention for different reasons.

Irfan is one of Side-Line’s favorites, but after two exceptional albums it has become rather quiet in the band’s camp. “The Eternal Return” is their first new work since “Seraphim” (2007), but I can already tell you it will be, in my opinion, the ‘album of the year’!

This band remains inspired by ‘sacred and folk music traditions of Bulgaria, the Balkans, Persia, the Middle-East, North-Africa and India, as well as by the musical and spiritual heritage of Byzantium and Medieval Europe’. The band has often been compared to Dead Can Dance and that’s a link, which already comes through on the new work. I know it sounds weird to say, but Irfan always had a bigger influence on me because of their more traditional and especially authentic sound. They like to compose their songs with an impressive arsenal of authentic and acoustic oriental instruments, which inject this particular magic atmosphere to their work.

Irfan is the sacred union between enchanting music and heavenly female vocals. The music is directed by Ivalyo Petrov while vocalist Denitza Seraphimova sounds like an angel muse. But Irfan is much more than both aforementioned members. It is a real collective featuring different musician playing different instruments. You can feel a true passion for instruments, and also for different cultures.

The main difference between both previous albums is the global improvement of the production process. The album feels like touched by the hand of God. It is a sacred union and an intercourse between sound and voices, which will rapidly lead you towards a strong visual universe where you’ll enter a dreamy universe.

The title song opens this work with grace and mysticism. The sound of an Eastern flute reinforces the mysterious impact while the dreamy vocal parts will be your guide during this transcendental trip that will hold you in its grip for more than 9 minutes.

“Burana” is the next essential piece, which sounds a bit tribal-like for the rhythm. It’s a song about a local wind of Eastern Asia, Siberia and the Balkans as well. I didn’t exactly get the feeling of wind rather than getting into a new transcendental trip joining a pure orgasmic climax revealing a truely symphony between the different elements of the song.

“Salamander” is the next highlight and a real special song as well. It of course is a cover version of Dead Can Dance. Irfan got the permission from Brandon Perry himself to cover this song. It’s a real challenge to cover such a legendary formation like Dead Can Dance, but Irfan did it a graceful and judicious way accentuating their own mystic and authentic style. Male and female vocals are operating like the attraction between yin and yang while here again you’ll possibly get into a trance-like experience.

Irfan next moves throughout a few quieter pieces of reverie, but still animated by mystic passages and sacred arrangements. We’re getting back into charm again with “The Golden Horn” symbolizing the meeting between Europe and Asia under the walls of the ancient Constantinople. I also experienced this song as clearly a message of peace between different cultures. This is an instrumental song, which mainly reflects the musical heritage of Asia instead of Europe.

The last cuts are getting deeper into reverie although “Tebe Poem” evokes some liturgies masterly performed by the magic of the female vocals. “Day To Pray” sounds a bit darker, but remains a delicate and warming caress for our devoted ears.

Conclusion: I didn’t know what to expect from this ‘return’, but “The Eternal Return” clearly appears to be Irfan’s opus magnum. This album is a deeply artistic creation a band can be only proud of while listeners can be only thankful for such a great moment of enjoyment.