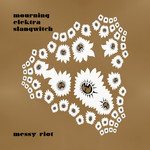 Background/Info: Behind Mourning Elektra Slangwitch is hiding Messy. This female multi-artist has already benen active since the very early 90s and has released considerable number of productions, getting involved in multiple projects. Most of her work was released on the Belgian EE Tapes and her own label Messy Productions. She now joined hands together with Seja Records to unleash this vinyl under the moniker of Mourning Elektra Slangwitch.

Content: It’s nearly impossible to label the sound of this creative lady. She’s exploring an impressive spectrum of influences although the common element probably is a kind of vintage and minimal format bringing us back to late 80s and early 90s music.

The work starts in a kind of fascinating goth-cabaret style and progressively evolves towards a more visual and cinematographic sound. It sounds a bit ritual-minded as well. One of the main characteristics is the particular timbre of voice of Messy. She likes to play with her voice like with an instrument. It can be spooky and bewitching.

The minimalism of the work finally evolves towards a fascinating final part where Mourning Elektra Slangwitch is dealing with pure and efficient electro-pop music in the truest 80s spirit.

+ + + : This artist clearly sounds unique because of her diversity. Some of the cabaret-like songs and final electro-pop pieces are absolutely well-crafted and cool, but I also have to mention the beautiful and minimal-ambient/cinematographic minded “Walling”.

– – – : “Messy Riot” is a versatile album from an artist who maybe tried to exorcise a maximum of ideas on one and the same album. It sometimes gives you the impression listening to a compilation. It definitely does not sound like a real accessible production.

Conclusion: This album sounds a bit like having been composed by an alien. It moves throughout different styles and influences like a kind of sonic voyage illuminated by cool vintage elements.

Since you’re here … … we have a small favour to ask. More people are reading Side-Line Magazine than ever but advertising revenues across the media are falling fast. And unlike many news organisations, we haven’t put up a paywall – we want to keep our journalism as open as we can. So you can see why we need to ask for your help. Side-Line’s independent journalism takes a lot of time, money and hard work to produce. But we do it because we want to push the artists we like and who are equally fighting to survive. If everyone who reads our reporting, who likes it, helps fund it, our future would be much more secure. For as little as 5 US$, you can support Side-Line Magazine – and it only takes a minute. Thank you. The donations are safely powered by Paypal.
Tags: Mourning Elektra Slangwitch