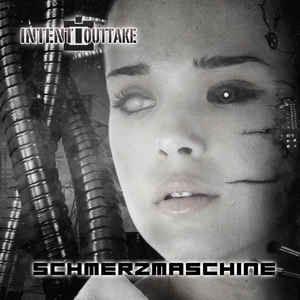 Background/Info: “Schmerzmaschine” is the third album accomplished by the Leipziger (Germany) duo Bastian Polak – Andreas Engleitner. The fans of the band previously discovered the EP “Eclipse” which featured two songs that have been mixed for this album.

Content: If you never heard of this band before you quickly will recognize a sound reminding you of some famous German bands such as Project Pitchfork (for the bombastic arrangements), In Strict Confidence (for the complexity and charisma of the vocals) and Rotersand (still for the complexity, but also for the more refined approach). “Schmerzmaschine” doesn’t sound at all like a copyists, but simply composed an intelligent although somewhat ‘classical’ work featuring several great cuts. Notice by the way there’s a song featuring guest vocals by Chris L (Agonoize, Funker Vogt, Sexorcist ao).

+ + + : This is a real mature production for the writing of the songs and the great sound production. The songs have been accomplished by great sound treatments and carried by a talented singer. The song featuring Chris L is not my favorite cut although a nice little extra. The sound and influences might be familiar ones, but I really believe Intent:Outtake has achieved a great work, which is without a shadow of a doubt their most successful album to date. I don’t want to compare them to In Strict Confidence, but there’s a similar approach in sound with earlier releases of this band. Last, but not least the album features a few potential hits or at least club killers.

– – – : Despite of some potential hits, the album doesn’t have ‘the’ hit that would be recognized by all music lovers.

Conclusion: I’ve been positively surprised by this album and the progression of Intent:Outtake. I’m not affirming that they could become the ‘big next thing’ in dark-electro land and the world of EBM, but they clearly have the potential to grow to the top!