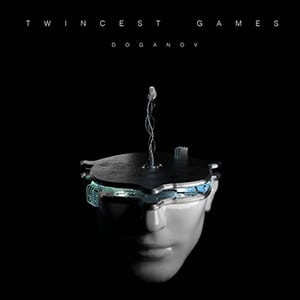 Background/Info: Third self released album (EP) of this underestimated Belgian band, described as Praga Khan meets Rammstein, that was formed in 2010. Twincest Games is a story about a twin of which one doesn’t survive the pregnancy. The other one gets born with a tremendous sense of loss and needs to fill that void. A cocktail of beauty and strange relationships are destructive but a good surrogate. Every song tells another chapter of this story.

Content: “Cupid’s Dance” opens the album in a brilliant way: synth- and guitarriffs are perfectly combined with the harsh voice of singer Karl. “Twincest” is released as a first single and carries the typical Doganov concept: slowly built up verses followed by an exploding climax in the choruses. The guitars are more dominant on “Grimm”, while “Take The Night Away” has a very melodic chorus. “Receiver” is a track that easily can fill a dancefloor, a nice combination between electro and guitars, in the Goose-style! Track 6 is a smashing remix of “Endear You” (from the first album “Something Dark To Dance To”) done by Jürgen Engler of DIE KRUPPS. The very danceable Doganov-remix of “What You Need” from Goose is also featured while the last track “Whack This Guy” from La Muerte also got a nice Doganov remix-treatment.

+ + + : 8 high-quality songs are presented on this limited edition EP that was produced by the band itself. Doganov keeps following the same road as before, bringing danceable dark songs, full of modern electronics with a layer of smashing guitar-riffs over it!

– – – : This band should already have been picked up and signed by a label for a long time!

Conclusion: If you’re into electronics combined with guitars, check out Doganov! Step by step this promising band is reaching a wider audience. Make sure you see one of their explosive live-gigs as well!