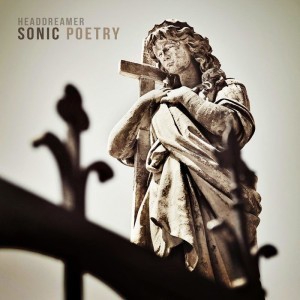 Background/Info: Robert Gajdos is a Slovakian artist who has already released a respectable number of productions on Aliens Productions. This new EP comes one year after the EP “Lost In Space”.

Content: Headdreamer definitely belongs to this new ‘flow’ of intelligent electronic artists who we commonly define as IDM. “Sonic Poetry” totally fits to this approach and already reveals a sophisticated and intelligent production leading the listener into reverie. The multiple sound effects and ambient atmosphere create an astral dimension. You feel like surrounded by distant stars. A kind of space-piano arrangements mixed with aquatic sound will give you a real comfortable feeling.

This dreamy, ambient universe is accomplished by some samplings and here again you’ll notice all the complexity. Every single element of the work has been handled with care and precision. It creates this typical IDM touch, which is present from start till finish.

+ + + : Robert Gajdos is a really talented sound architect who holds onto his familiar ‘space’-like influences, but who already accomplished it with a genius touch. The ambient atmospheres have been mixed with slow, but exciting rhythms creating the final magic of the work. “Sonic Poetry” is accomplished with numerous sound effects and treatments.

– – – : The remix of “You Will Burn” by Oxyd is okay, but definitely not the best one from the EP. It simply reveals the talent of Headdreamer although I’ve always liked the work of Oxyd as well.

Conclusion: There’s no better conclusion than evoking the title of this work: pure “Sonic Poetry”!

Since you’re here … … we have a small favour to ask. More people are reading Side-Line Magazine than ever but advertising revenues across the media are falling fast. And unlike many news organisations, we haven’t put up a paywall – we want to keep our journalism as open as we can. So you can see why we need to ask for your help. Side-Line’s independent journalism takes a lot of time, money and hard work to produce. But we do it because we want to push the artists we like and who are equally fighting to survive. If everyone who reads our reporting, who likes it, helps fund it, our future would be much more secure. For as little as 5 US$, you can support Side-Line Magazine – and it only takes a minute. Thank you. The donations are safely powered by Paypal.
Tags: Headdreamer