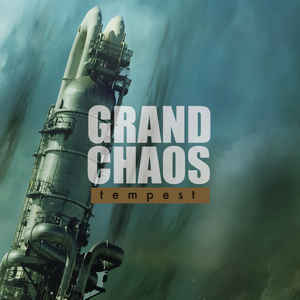 Background/Info: Belgian based artist Cheleskov Ivanovitch is back on track with a new album full of remixes. Devoted to minimal EBM carried by analogue sound, Grandchaos became a reference in the vintage- and minimal EBM style. The third and so far last album “We Suffer When The World Changes” was released in 2014, and still serves as a source of inspiration to get new remixes.

Content: “Tempest” features 12 remixes plus one new version of “Memories In Poison”. Granchaos again selected a fine list of bands to remix 6 songs from the last album plus one cut (cf. “Ressurection”) that was originally released on the second album “Rumours Of My Life”.

There’s a cool diversity between truly minimal-EBM songs in the vein of the original edits and more personal remixes with some extra ‘dance’ elements on top or techno grooves, and also more ‘classical’ EBM and even experimental cuts. Among the remixes you’ll find bands such as Di*ove, Electro Synthetic Rebellion, Signal Aout 42, kFactor, Bak XIII, 8khz Mono, Akalotz and a few less familiar names such as Fatal Aim, Mechaload, Krawallchuck and Big Toxic.

+ + + : There’s an interesting diversity between the remixes, but especially 2 songs emerge from this remix-orgy. ESR did an impressive and pure minimal-minded work remixing “Man On Fire” while Signal Aout 42 transformed “The Tempest” into a kind of free-electro-dance and body-driven version. I expected Akalotz to transform “The Tempest” into a pure old-school EBM cut, but they still held onto the minimal format of the song achieving a cool remix. The so-called “Storm Cloud Version” of “Memories I A Poison” is another noticeable song that will please the lovers of Grandchaos.

– – – : I know Chesleskov Ivanovitch is simply fond of remixes, but I get the impression he’s a bit abusing from this recipe. After having released the EP’s “Days” and “Memories”, which already were into remixes, he moves on with the same formula. I should say it’s time now for new stuff!

Conclusion: DJ’s will for sure get some new potential dancefloor killers on “Tempest”, which I especially like for its variety and nice cocktail of interesting bands.