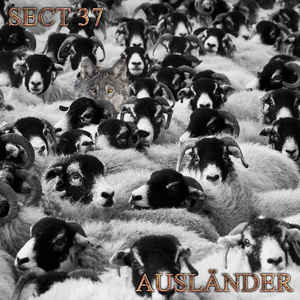 Background/Info: Sect 37 or Section 37 is an English music project that was set up in 1999. The band has always been driven by Stuart J. Harris and with the help of some contributors. Harris is now working with John Frost. “Ausländer” is the fourth full length album of Sect 37.

Content: It’s not that easy to precisely define the sound of this work. Sect 37 mixes multiple influences with each other. It all starts a rather electro-ritual & trance way while the next cut reveals industrial elements. Quite progressively you’ll notice pop elements, ambient-electronics and even EBM. A few passages are more into a cinematographic sound composition.

Sect 37 seems like exorcizing multiple sound ideas. The vocals are quite diversified as well and sometimes joined by spoken samplings and extracts from speeches.

+ + + : “Ausländer” definitely is an original work, which is hard to grasp. So it’s neither a cliché nor emulation and that’s what I particularly like when listening to the music. There are several cool cuts on this album. I like the offspring between ambient and electro-pop featured on “Behind Your Eyes” or the more complex and somewhat Mentallo & The Fixer reminding “Connected… But Alone”. “S.N.A.F.U.” is more for the EBM-minded lovers and already something different, but interesting.

– – – : Even if diversity is one of the main strengths of this album it also is a bit confusing. I sometimes got the impression that I was listening to a compilation instead of a band.

Conclusion: “Ausländer” is a sonic enigma, which is hard to label, but globally speaking rather enjoyable. Sect 37 is a kind of sonic chameleon.