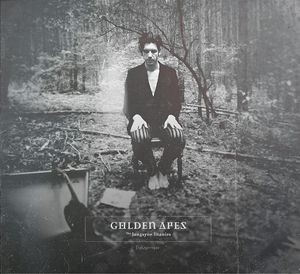 Content: Golden Apes originally planned to release an EP, but it seems that their last acoustic tour inspired the German formation to rework five ‘classical’ songs while three new songs were added as well. So in the end “The Langsyne Litanies” became a new full length album.

The album opens with an acoustic reworked version of “Devil”, which was originally released on their previous album “Riot.” You also will re-discover 2 reworked songs from the album “The Geometry Of Tempest” plus one more song of the “Riot”-album and “Digging Towers” originally released at “Denying The Towers Our Words Are Falling From…” All the songs have been reworked with classical instruments like cello, classical guitar, flute and even percussion.

From start to finish, it injects a typical rock-folk touch to the work, which reaches its real first climax on “Ferryman.” I like the global atmosphere hanging over this song. It sounds a bit sad and reminds me a bit to some work by Rome. The guitar and piano playing are quite cool here. Another noticeable cut is “Digging Towers”, which is a great production and that might appeal to fans of Nick Cave. The grave timbre of voice injects an extra dark and gothic touch to the global production as well.

The three new songs aren’t exactly what I would call my favorites, but I however enjoyed the somewhat ballad-like “Rosary.” It’s more into some neo-folk inspiration, but the approach is somewhat similar, which contributes to the originality of this release.

Conclusion: Golden Apes are not the first ones to revisit some of their ‘classical’ songs with an acoustic- and successful production. This is an album filled with dark reverie.

Since you’re here … … we have a small favour to ask. More people are reading Side-Line Magazine than ever but advertising revenues across the media are falling fast. And unlike many news organisations, we haven’t put up a paywall – we want to keep our journalism as open as we can. So you can see why we need to ask for your help. Side-Line’s independent journalism takes a lot of time, money and hard work to produce. But we do it because we want to push the artists we like and who are equally fighting to survive. If everyone who reads our reporting, who likes it, helps fund it, our future would be much more secure. For as little as 5 US$, you can support Side-Line Magazine – and it only takes a minute. Thank you. The donations are safely powered by Paypal.
Tags: Golden Apes