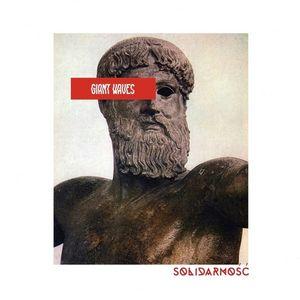 Background/Info: Giant Waves is a Russian trio, which released their debut album “Solidarnosc” during 2015. “Solidarnosc” features an album plus a bonus EP-section.

Content: The sound of this band covers different genres finding their main inspiration in the new-wave and rock-wave music of the 80s plus a harder post-punk touch on top. The sound is pretty British reminding me of an imaginary hybrid between Big Country (for some of the carrying guitar parts) and The Lords Of The New Church for the new-wave & post-punk inspiration. There even is a harder element that reminds me a bit of The Ramones.

“Solidarnosc” also reveals a few more influences getting closer to pop-rock music. This trio deals with an interesting eclectic approach, which also unleashes a few dreamy passages spiced with some melancholia. There’s a nice twist between reverie and power.

+ + + : I like the diversity of the album and the retro-minded (80s-like) source of inspiration. The album also features a bonus section, which is meant as an EP (entitled “Hope And Fight”) revealing well-crafted songs with a great progression.

Conclusion: This debut album reveals multiple well-crafted pieces while Giant Waves maybe is the most British-sounding band from Russia.