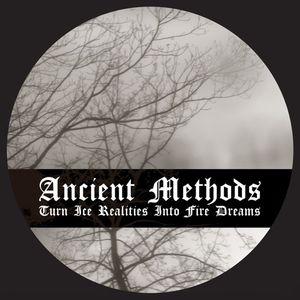 Content: Ancient Methods started as a duo, but Michael Wollenhaupt remained the single member of the crew. This Berliner based producer and DJ is releasing EP’s since 2007. He’s not a real prolific artist, mostly releasing one EP a year. Some of his earlier work was released by labels like Sonic Groove (set up by Adam-X) and Aufnahme + Wiedergabe, but mainly by his own label Ancient Methods.

The new EP has been released by Hands and that’s a rather interesting signing. The leading industrial label from Dortmund again confirms by this new signing to be really open-minded, but also to confirm that there’s sometimes a thin line between industrial and techno.

This vinyl features 4 new cuts by Ancient Methods opening with the irresistible “Guided By The Force Of Compassion”. I get totally wild by this composition, which clearly unleashed industrial influences, but especially sumptuous electronic manipulations that will appeal to IDM-lovers. This song is not entirely representative for the rest of the EP, but this for sure an astonishing opener. The next song is more repetitive and clearly more into technoid structures.

The B-side opens with the track “This Is All I Could Do” revealing a dynamic cadence, which reminds me a bit of The Klinik. The electronic treatments are more into a kind of industrial-trance approach while there are a few cold sounds running through the cut.

“My Ice Baby” is another cool cut, which is moves into experimentalism while holding on to the roughness of industrial music and the magic of IDM. Some intriguing vocal fragments create a nice twist with the music.

Conclusion: I don’t know if this is the future side of techno music, but it for sure is an avant-garde industrial work featuring intelligence and the passion for sound manipulations.

Best songs: “Guided By The Force Of Compassion”, “My Ice Baby”.