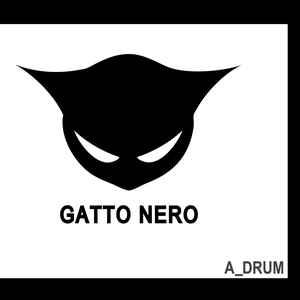 Background/Info: Behind Gatto Nero (translated ‘Dark Cat’) is hiding a new ‘techno’-driven project driven by Herman Klapholz (Ah Cama-Sotz). Belgian industrial veteran Klapholz was also involved with side-projects such as Wai Pi Wai and Pow[d] er Pussy. The last mentioned project was an interesting and funny duo and I noticed certain link with the name of this new project. Well, I know Herman Klapholz is a great friend of cats, which probably explains a lot of things…

Content: “A_Drum” probably stands for the most surprising and unexpected work by Herman Klapholz. He clearly experimented with techno music while keeping his dark sonic elements and other trance ingredients. But this is the kind of music you perfectly imagine dancing to in a Berlin club or big international techno festival.

+ + + : Herman Klapholz took me by surprise, revealing a hard-danceable bridge between industrial and techno music. Both music genres are more and more related, which explains the progressive move of industrial labels to release these kinds of productions. But Gatto Nero doesn’t stand for ‘cheap’ techno music. You rapidly hear where this artist comes from and what his music background is. It remains a dark and somewhat baleful music format. The frenetic cadence has something transcendental so in the end I clearly can speak about interesting techno music for dark souls.

– – – : The main strength of Gatto Nero also is his major minus point. This work is maybe too techno orientated for industrial die-hard fans.

Conclusion: I think it’s fun to see a long-time servant such as Herman Klapholz releasing this kind of music. It first of all shows the open-minded music spectrum of an artist who’s not in an ‘automatic pilot’-modus, but simply has fun by composing the music he likes. Let’s now see if this ‘black cat’ will bring him luck…