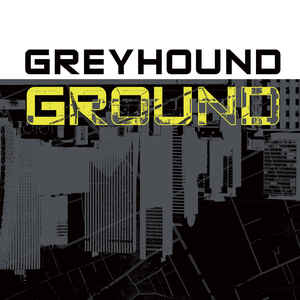 Background/Info: Steffen Lehmann is terrorizing the industrial scene for numerous years now and became one of the flag holders in rhythmic-noise. He regularly switches from Greyhound to the more techno-industrial Syntech project, revealing impressive writing skills in both of his projects. “Ground” is the seventh official album for Greyhound.

Content: If you’re familiar with the merciless industrial assaults of Greyhound you already know what you’ll get. I however have to say the opening cuts are a little bit different. The tracks remain pretty hard, but also revealing a few different elements, which are more ambient-like and accomplished with cool sound effects. But quite progressively the ‘sonic monster’ is awakening and starts to produce good-old and powerful industrial music. It sounds heavy, sometimes a bit into bombast, then as a wink to one of the greatest instigators in the genre (cf. Esplendor Geometrico) and finally into transcendental rhythmic-noise waves.

+ + + : The opening songs are quite interesting for showing a more complex and elaborated approach. It’s not that Lehmann is reinventing his sound, but he clearly became a little more sophisticated. Quite progressively he invites the listeners for a deadly industrial ride made of a rough sound sculptures and sharp noises. But the main strength of this work is that it progressively brings you into trance. Steffen Lehmann is a truly industrial genius who throughout the years have somewhat polished his work with subtle noises, samplings and other little details.

Conclusion: If Greyhound was to become sex, it definitely could be associated with a gang-bang featuring 16 tracks! This is a kind of shameless, perverted sound made by a truly industrial shaman!