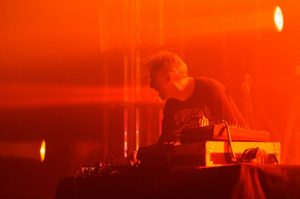 Belgian industrial veteran Herman Klapholz is internationally known and recognized for his Ah-Cama Sotz project. He got involved in multiple other projects, but his newest creation Gatto Nero is without a shadow of a doubt the most surprising project he ever get involved with. It remains dark and featuring industrial elements, but in the first place it’s ‘techno’ music! The debut album “A_Drum” released on Hands brings industrial- and techno music closer while it might appeal for a wider audience. I asked Herman Klapholz about his ‘dark cat’…

Q: Gatto Nero sounds to me as your most surprising project ever! Do you think it’s the kind of ‘sound-direction’ you could have experimented with when you were younger and what did you try to express with Gatto Nero?

Herman: Well, I’ve been listening to ‘dance’ music since a long time. I am a seventies child so, I’ve been ‘injected’ with lots of dance movements since then. I remember the start of techno in the eighties, quite harsher dance/music style than most of soul and funk bands in that period. I remember that even in the nineties/2000, friends told me, techno music was finished. Dead ahead. Couldn’t believe this, and still following this style, it became darker and getting an industrial edge since then.

Well don’t try to explain this to the young listener, it’s just a feel. Having produced music since 1993, I was very enthusiastic about the forthcoming period of techno music. I embraced techno elements into Ah Cama-Sotz , be it more tribal, the way I  like it to be. I think the time was right to put out a ‘more’ techno production as GATTO NERO. I experimented since quite a while, recording and producing lots of sessions, until I told myself ‘the time is right’. Let’s get it on….

Q: Cats seem to be an important source of inspiration; after Pow[d]er Pussy this is another project related to ‘cats’. What is this love/fascination for cats all about and what happened with Pow[d]er Pussy by the way?

Herman: Bats and cats both are my main musical feeling and thing. Bat is the dark side of music as cat is mysterious,  curious and funny, and as they say ‘curiosity kills the cat’ (laugh)! Well I think Pow[d]er Pussy has been an interesting experiment after all, but being a producer/musician as well, there’s a time you have to ‘let go’ a project, when you have the feeling, you cannot convey it to the next level and there isn’t any interaction happening anymore between the band members, it’s time to stop a project!

Q: “A_Drum” sounds to me as pure ‘techno-fun’ with a dark flavor on top! What kind of production did you’ve in mind when starting the writing of the album and what can you say about the composing process properly speaking?

Herman: Experimenting and having produced more than 25 tracks, the time was right to choose, which ones could fit on the CD. My label HANDS, listening for the first time to the material was quite excited, and it took quite some time to pick up the right tracks. HANDS did a great job choosing them! We called the CD “A_DRUM” after the “a_drum”CD track that I like a lot. It has a tribal/industrial edge with a nice techno feel. In this style I must think about the label DRUMCODE. It’s all about a good groove and harsh beats (laugh).

Q: The gap between industrial- and techno music seems to become smaller. How do you analyze and explain this evolution and crossover?

Herman: At the end of the seventies and starting eighties there were already dark music bands with ‘minimal techno’ influences. These electronic bands already experimented with synthesizers sounds, so it’s quite obvious that these bands, nowadays, remind us to primary  elementary techno as we knew it in the 80’s. But saying this, since several years the gap is getting smaller. The fun is than young techno musicians are busy making dark-techno, even without knowing the dark side of ‘our’ underground scene. Their approach towards music  is probably different than ours. But ok, most of commercial DJ’s aren’t playing radical hard and dark-techno. House music is still big,  but in a different context. I support the future in blending dark techno an ‘industrial’ music.

Q: Do you expect Gatto Nero will open new horizons for you as an artist? I’m thinking about live performances at techno events, remixes for techno artists… What do you think about it?

Herman: Well I hope so. Always experimenting in mixing 90s techno and beats/grooves of today’s techno, I think one has to find his colors and blends in this style of music. Minimalism is great, but personally I like to push it a little bit further, and discovering new horizons.

Q: You definitely are an open-minded and eclectic artist so I can imagine there are other kinds of music you would like to experiment with. What are you dreaming of what brings the future for Gatto Nero?

Herman: Pop music is not really my thing in producing tracks! I am much underground minded. Regarding my GATTO NERO project I would like to push it towards different eclectic dance scenes and audiences. Speaking of such, it’s not easy nowadays as there are so many good techno producers who are already known for many decades. Techno organizers are sensible to the techno audience.  Personally I’m still convinced there is space for more good musical projects in this context.

Since you’re here … … we have a small favour to ask. More people are reading Side-Line Magazine than ever but advertising revenues across the media are falling fast. And unlike many news organisations, we haven’t put up a paywall – we want to keep our journalism as open as we can. So you can see why we need to ask for your help. Side-Line’s independent journalism takes a lot of time, money and hard work to produce. But we do it because we want to push the artists we like and who are equally fighting to survive. If everyone who reads our reporting, who likes it, helps fund it, our future would be much more secure. For as little as 5 US$, you can support Side-Line Magazine – and it only takes a minute. Thank you. The donations are safely powered by Paypal.
Tags: Gatto Nero